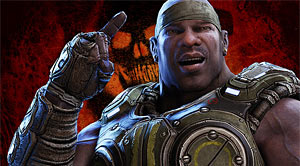 “You can’t stop the train, baby!” Expect to hear those words again from “Cole Train”, a successful hard-hitting Trashball player who appeared in the previous entries of Gears of War could be returning in the upcoming sequel.

According to Lester Speight, the main actor who voiced Augustus “Cole Train” in GOW was quick to reveal a few days ago via Twitter that he’s been approached to reprise his role.

@MistaPeerez: @lesterspeight have you gotten a call about a new gears? You have to reprise your role! #whoobaby” “Yup!”

That’s right! “Cole Train” is the very first character that we know of so far that should be returning in GOW, unless Speight’s is trying to pull a fast one here on his friends. My best bet it’s definitely true, and it shouldn’t be too long before Black Tusk Studios officially reveals a few more characters, including “Cole Train”.

Unfortunately, the news stop right here because nothing else has emerged on GOW, the game wasn’t even showcased during E3. The last we heard is that it’s in development at Black Tusk, and they will try to stay true to GOW canon for its new game.