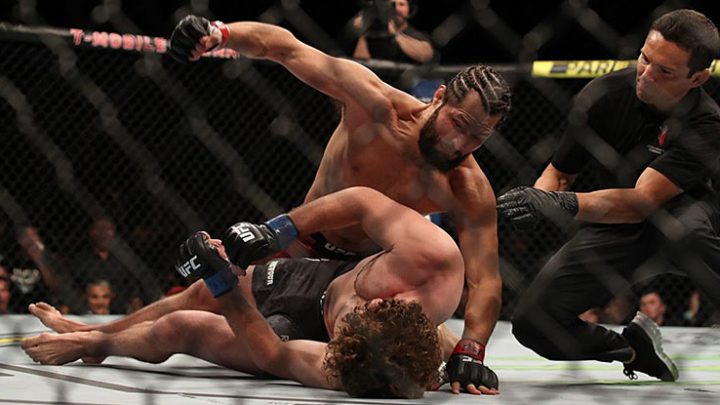 Jorge Masvidal makes Ben Askren eat his own words and he did it in the fastest way possible. In fact, following last night’s brutal win, Masvidal now holds the fastest win in the history of the UFC.

With a win like that, “Gamebred” could possibly be the goat in the welterweight division. It took Masvidal around three seconds to blast Askren with a flying knee strike in the head that sent the former Olympian crashing to mat unconscious. And another two strikes before referee Herb Dean stopped the fight.

Askren was completely out cold.

During the Octagon interview with Joe Rogan, Masvidal expressed his thoughts on the rivalry and especially the KO victory.

Cause he’s a bum. That dude was talking wild. I had to show him that there’s consequences sometimes. There’s some bad motherf—kers out there and you don’t want to wake them up.

You should have kept your mouth shut. I probably would have beat you up in the second round. You guys are welcome for ending that dude.

As for Askren, he was helped out the cage once he got back up on his feet. According to UFC president Dana White, “all his stuff came back negative so he’s OK.” Askren later addressed his loss on his official account on Twitter.

If you missed the fight last night, then you can watch the replay of the KO in the video right below.