Gears Of War 3 Review – Or: Well-Oiled Cog Or Squeaky Wheel? 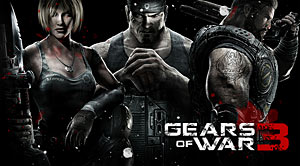 If you’re new to the Gears Of War universe, sit down and take notes, there will be a pop quiz at the end and the winner gets to rub my feet. Now shut up, sit in the corner, and contemplate what the loser gets. Try not to pee yourself. Veteran Cogs know exactly what to expect and the game doesn’t disappoint. As an experienced Gears player, it only took me a few minutes to adjust myself to the game’s controls. As usual, it’s all about the contextual cover system. You’ll hop from crumbled wall to crumbled pillar to crumbled… look, it’s a post apocalyptic world, everything’s kinda shoddy looking… Clearly, the maid hasn’t been in lately.

The shooting aspect of the game hasn’t changed much since the last iteration. In typical Gears Of Wars tradition, each weapon comes with a satisfying finishing kill when you absolutely, positively want to feel your opponent’s geysering arterial spray right in your face. The over-the-shoulder, blurry running man cam is back whenever you sprint from cover to cover. Not a big fan, personally, but it’s such a franchise staple that I’m willing to forgive its inclusion.

While running from place to place and putting holes in anything that shoots back at you is still the name of the game, you’ll spend nearly as much time engaging in Gears of War 3’s major set pieces. Turret sequences are numerous and gigantic boss battles really devastate the environment. Gears’ main campaign will run you about 8-10 hours, a decent enough length for this type of game. Of course, multiplayer is where most gamers who purchase this game will spend countless hours of their time.

While the game’s 5-on-5 online matches are relatively small compared to other products on the market, Gears Of War 3 is an example of quality over quantity. Gears 3 sticks to its proved modes. Team Deathmatch, with limited respawns for each team, is a pressure cooker that forces players to take the time to help fallen teammates back on their feet. Other modes exist with no respawning at all and Execution mode forces players to finish off fallen enemies to score points.

Clearly, Horde mode is what thousands, if not millions, of online matches will be all about. Gears Of Wars 3 as stumbled across an infinitely addicting pastime with this mode and it’s still as fiendishly enjoyable here. Killing foes to earn cash, barricading tight corridors, trying to stay alive just long enough to survive one more round… nothing gets the ol’ adrenaline going like Horde mode and the fresh coat of paint in Gears Of War 3 should keep it popular for years to come. The inclusion of Boss fights every 10 rounds is an added bonus. Uh, guys? I don’t think the spike strip is gonna hold this one…

Even with a slightly newer graphics engine, Gears Of War 3 isn’t a major leap forward in graphical prowess from its predecessor. Yes, the graphics are slicker and everything looks slightly nicer than in Gears Of War 2, but the franchise’s color palette is so gray and washed out that no amount of pixel pushing could make it look any better than it already does.

The series’ unique character designs and art style return and are as pleasantly over-the-top as usual. Every character looks as if steroids are part of their daily breakfast, but it’s a part of the franchise’s charm.

One area in which Gears 3 excels are boss fights, with Epic really outdoing themselves in the sheer size of some of these encounters. Ultimately, they all boil down to shooting the glowing spot on the boss’ chest but visually, they’re all great.

The music in Gears Of War 3 is a standout. Familiar themes from past games return here, along with a new set of boisterous tracks designed to get your blood pumping. While the secondary cast members sound unconvincing, all of Gear 3‘s main characters are voiced by series’ veterans or experienced newcomers. The excellent John Di Maggio (who will always be Bender from Futurama to me) has a lot more heavy emotional scenes as Fenix this time around and he performs them well. Farscape actress Claudia Black shows up as a new team member. Black as been making a name for herself on the voice acting circuit these past few years, with roles in everything from Dragon Age to Mass Effect, she seems to relish every character she gets to play.

Overall, the Gears Of War 3 presentation is a complete and satisfying one. While no huge leap forward, the graphics are still top-of-the-line and the audio never fails to impress.

Gears Of War 3 is one of the year’s biggest games and it certainly lives up to all expectations. One of the most important franchises in the industry gets a proper trilogy capper, topped off with excellent multiplayer and a presentation that earns top marks in all categories. Go get it. NOW! THIS I COMMAND!