This Week In Gaming News – The Elder Scrolls V: Skyrim, Dead Rising 2: Off The Record, Gears Of War 3 & More 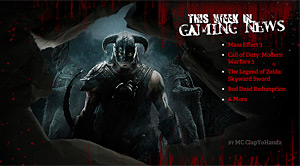 Here’s the top gaming news for the week of August 29th, 2011 brought to you by Yell! Magazine

Xbox owners will get first crack at the pair of downloadable add-ons for The Elder Scrolls V: Skyrim. It’s not so bad, it’s only a 30-day exclusive. Skyrim will be out on November 11th.

Dead Rising 2: Off The Record

Capcom’s Frank West retelling in Dead Rising 2 : Off the Record sounds like a great zombie filled proposition. New areas, weapons, missions, and our favorite wartime photojournalist to boot. All at a bargain price. To sweeten the deal, at the Penny Arcade Expo this week, Capcom announced Sandbox Mode. Finally, you can kill zombies to your heart’s content without having to worry about things like tasks, and time limits. Dead Rising 2: Off the Record will be out on October 11th.

Its been almost 3 years since episode 2 came out, and after a long search, Penny Arcade Adventures: On the Rain-Slick Precipice: Episode 3 finally has a developer. Zeboyd Games, makers of retro style throwback games Breath of Death VII, Cthulhu Saves the World, will be taking the reins, and promises to take the series in a new 8-bit direction. Expect episode 3 some time next year.

This week, Bioware’s Director of Marketing, David Silverman revealed that the nifty Mass Effect: Genesis interactive comic that allowed PS3 players to determine key decisions in part one for Mass Effect 2, won’t be a feature in Mass Effect 3. Instead the story will be recapped with two “Previously on Mass Effect” vignettes. So for newcomers to the series, all those pivotal choices, like who dies, who lives, and who sleeps with who, will be already decided for you. Mass Effect 3 will be out on March 6, 2012. That should give you enough time to play through the first 2 games, or at least part 2. On the bright side, the new default female Commander Shepard looks great.

Like most games nowadays, you can pay upfront for season pass to all the upcoming DLC for a title. Gears of War 3 will be no different. 2400 Microsoft Points will get you access to the first 4 downloadable add-ons for the new Gears. That’s a 33% discount. The first content pack is already slated for November. As an added bonus for those who buy in, will also get the “Liquid Metal Weapon Set”. Gears of War 3 will be out on September 20th.

The Legend of Zelda: Skyward Sword

The first wave of free “I’m sorry for making you pay too much for a system” games came out this week. If you bought a 3DS before the August price drop, and updated or connected to the eShop, go download your 10 free NES virtual console games. Simply connect to the eShop, go to “Settings / Other”, and select “Your Downloads”. Scroll down the list to find your free copies of Super Mario Bros, Metroid, The Legend of Zelda, Wrecking Crew, NES Open Tournament Golf, Donkey Kong Jr., Balloon Fight, Ice Climber, Zelda II – The Adventure of Link, and Yoshi. There’s still more free games to come in the form of another 10 Gameboy Advance games coming before the end of the year. We’ll let you know when to get your hands on them here at Yell! Magazine.

Persona 4: The Ultimate In Mayonaka Arena

For all you Japan RPG aficionados, your favorite high school simulator / role-playing game is taking all your beloved characters and making them fight each other in Persona 4: The Ultimate In Mayonaka Arena. The game will take the heroes from Persona 4, and Persona 3 and pit them in mortal combat. If you want more Persona, an enhanced version of Persona 4 is coming to the PlayStation Vita. And of course, series developer Atlus is still hard at work on Persona 5. Get all your esoteric J-RPG news here at Yell! Magazine.

The contents of the “Hardened Edition” of Call of Duty: Modern Warfare 3 were leaked this week. So what do you get for the extra cash? How about a one year Elite membership that gives you free access to all DLC during the life of the membership. But wait, you also get exclusive emblems, camo, and much much more! Of course it’ll come in a nice shiny metal box with something resembling an art book to boot. That’s all fine and well, but what I’m waiting for is news on the “Prestige Edition”. We’ve gotten night vision goggles, and RC cars. I can’t wait to see how they top that this year. I’m hoping for something more practical, like an army utility vest. That would be sweet!

If you’ve been itching to get back into some Red Dead, now’s your chance. Rockstar is giving away the Myths and Mavericks add-on. This DLC includes 11 multiplayer maps, and 8 new playable characters. All at the low low price of free. The content will be available for download on September 13th for the Xbox 360 and PlayStation 3.