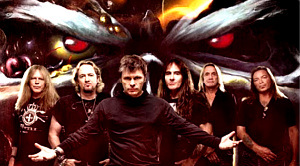 The Grammys were held on Sunday, February 13, 2011, and yes I know that was a few days ago, but I’ve been busy shoveling snow and traveling. Sue me.

Well, the news about the Grammys is a bit of a mixed bag. Yes, Iron Maiden won for Metal Performance for “El Dorado” off of *The Final Frontier, and that’s a good thing. But you also have to consider that, while Maiden is likely happy to have won perhaps the most coveted award in the music industry, it’s too little too late at this point in their illustrious career. Also, throw into that mixed bag all the criticism about the NARAS, and you might have an award that’s pretty meaningless.

While we were more or less rooting for Slayer’s “World Painted Blood” to win, Iron Maiden beat them out. Other nominees who were defeated by the British metallers include Korn (thank god they didn’t win), Lamb of God, and Megadeth (whom we would have been happy to see win as well).

Other categories in the rock world that we were interested in were the Best Hard Rock Performance (“New Fang” by Them Crooked Vultures won, defeating “A Looking in View” by Alice in Chains, “Let Me Hear You Scream” by Ozzy, “Black Rain” by Soundgarden, and “Between the Lines” by STP) and Best Rock Performance (which was won by The Black Keys).