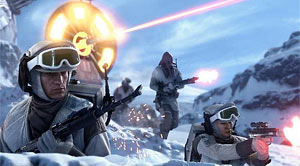 We already know EA set a new milestone with Star Wars Battlefront when they announced it attracted more than 9 million players during the beta run of the sci-fi shooter, making it the biggest in EA history. Now, the publisher has revealed more impressive stats in the form of a beautiful infographic.

In it, EA reveals Battlefront players logged 1.6 billion minutes, which is equivalent to watching the original Star Wars trilogy 4.2 million times. On top of that, players destroyed 783,392 Walkers and spawned as Darth Vader (5,938,148) and Luke Skywalker (5,904,806) almost equally. For the full stats continue reading below.