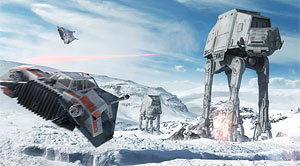 DICE is adding an additional day of testing to their ongoing beta phase of Star Wars Battlefront. This means Star Wars fans can continue playing the multiplayer portion of the game until Tuesday, October 13, 2015. Initially scheduled to end on October 12, the extended beta testing will allow DICE to conduct further technical tests on the infrastructure before they launch the sci-fi shooter next month.

Every time you log on, it’s helping us ensure the experience is going to be great at launch. As we get into the late stages of the beta, we will begin conducting further technical tests on our infrastructure.

These additional tests will start on Monday, October 12 and will run through Tuesday, October 13th, which will add an additional day to the open Beta. These tests are to help us find some extreme scenarios, and that means some players may experience occasional issues such as being kicked from the game or losing connectivity. This is all being done in the name of shoring up our infrastructure before we launch on November 17th.

Star Wars Battlefront officially launches on November 17, 2015 on Xbox One, PlayStation 4, and Windows PC. If you want to try the beta out for yourself, then use these download links to start playing right now.