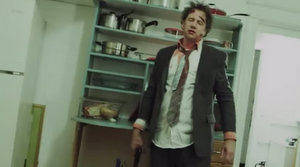 Jamie Kennedy (Scream 2, Scream 3, Three Kings) stars in Buddy Hutchins, a wickedly fun comical thriller about a guy that, well, loses it. We caught up with the film’s director, Jared M.Cohn (Born Bad, Jailbait, 12/12/12), to talk about how the film came together.

Buddy Hutchins is just a regular guy doing his best to support a wife and two kids. A recovering alcoholic, Buddy hasn’t had a drink for the better part of a year, but it turns out the only reward for his good behavior is a failing business and a cheating wife. Throw in a ruthless bounty hunter and a hot-tempered ex, and Buddy’s already short fuse is about to blow. Pushed over the edge and armed with a chainsaw, Buddy Hutchins is out for blood.

The movie looks amazing. Actors have trouble watching their own movies, what about filmmakers? Can you watch this yourself?
Thank you! For me I watch the movie a lot during the editing process, watching various edits as it all comes together. By the time the movie is finalized, I have seen many renditions of it. After it’s done I will only go back and watch some of it very occasionally. However, now that you asked me this, I think I need to have a movie marathon and re-watch all my movies.

How much do reviews mean to filmmakers? Do they still mean as much in this Internet-age?
They matter to some extent, I mean, there are many reviewers that just like to trash seemingly everything. A lot of moviegoers can’t seem to differentiate between an independent movie and a studio movie. If they don’t see the latest and greatest special effects and familiar faces on every frame, they think it sucks. So that sort of flak comes with making low-budget movies. That said, I definitely Google the movie and read the reviews, just to see what’s out there.

We get to see a different side of Jamie Kennedy here. How did the idea to use him come up?
I had known Jamie for some time before the movie, so we reached out to him. Not only because I knew him, but he was also perfect for the part.

Did Jamie get into those more violent scenes? Seems like he was having a hoot of a time!
He did! I think Jamie has a dark side that popped out, and, yes, he was really getting into it, which really helped the movie. Him getting into it the way he did added a nice sense of authenticity.

Did you do any research into guys like this? I assume they’d be everywhere!
I myself go to some dark places, so it wasn’t too difficult to get my head in the right space. Plus I wrote the movie.

Can you tell us about your other new film, Bound. It would seem a timely one because of Fifty Shades of Grey.
That was done by the kings of Mockbusters, and the producers of Sharknado, the almighty The Asylum. It’s a sexy movie, edgy. I had the privilege of writing and directing it. It came out nationwide in theaters January 9th.