Huntress Interview With Jill Janus: Pack Your Bowls Now, This Will Blow Your Mind 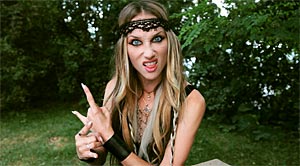 Huntress, formed in 2009 and signed to Napalm Records in 2011, is a band that’s coming up through the heavy metal ranks quickly. If you’ve been following us here at Yell! Magazine, then you know that we’ve been impressed by them since we were first exposed to them when they opened for Dragonforce. We finally had the chance to sit down with the gracious and vicious Jill Janus for an interview at Heavy MTL 2013.

Since our interview took place after the Huntress set, this being our second time seeing the band live, I told Jill that she was a “woman possessed.” The witch then began chanting, tied me up, and put me in a cauldron for tenderizing. I’m kidding of course, but she is a pagan witch and she did give me a somewhat confused look, but she rolled with it. But onstage, she does look possessed when she opens her eyes wide, gives those theatrical looks toward the audience, delivers her death scream, and strikes those poses with her cape flowing in the wind.

As you may have gathered, we chatted about witchcraft, in addition to the inspiration behind the new album (Starbound Beast, released on June 28, 2013), how the band has matured since the first album, women and sexuality in heavy metal, aliens, constellations, details on the upcoming video for “Zenith,” and much more.

If you’ve heard the new Huntress material and are interested in picking up Starbound Beast, it’s available in a variety of packages: CD DigiPak, Vinyl, and digital download. At Amazon, the CD is available for $9.99 and the MP3 for $9.49.

And if you haven’t heard Huntress, do so now and then order. I don’t think you’ll regret it — they’re straight up old-school metal with a modern twist.