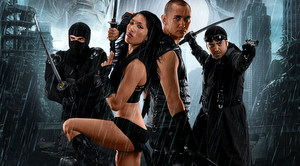 Justin Timpane, director of Ninjas vs. Zombies and Ninjas vs. Vampires, has a new movie coming out, and it’s said to be the final installment in the Ninjas vs. series. Ninjas vs. Monsters hits DVD and VOD on January 26th in the UK and February 6th in the U.S. We were lucky enough to score an interview with Timpane, in which he talks about his movie as well as other, more graphic types of horror, his horror influences, and the future of the Ninjas vs. franchise — see, this won’t be the last one.

In this final installment, the Ninjas and their friends find themselves pitted against the most evil and memorable monsters of them all – Dracula, Frankenstein, the Mummy, the Werewolf, and MORE! Loaded with martial arts action, bloody horror, gun play, magic, comedy, pop-culture references, and a tightly woven twist-filled plot.

The movie is hilariously funny – was that the intention? Or am I missing the message in the movie?
Oh, totally. Any movie that starts with “Once upon a time there were these dudes. Their lives sucked big fat donkey balls,” is not gonna take itself too seriously. We want the serious parts (and they’re there too) to be the welcome surprise bit of heart in what is otherwise meant to be a romp.

Do you think there needs to be more humor in today’s horror movies?
I think you can find it if you look. Cabin in the Woods, Drag Me to Hell, the Scream pics, even Blair Witch and Exists has a good dose of humor… the humor is there if you look. It’s not as prevalent as it used to be, but its there.

Many still seem pretty determined to disturb — with their torture porn and Human Centipede-esque biliousness — rather than simply give the audience a good time. Don’t you agree?
I think there’s room for the raw stuff too. There seems to be that cycle in horror, it gets lighter, then someone comes in with the gritty intense one, end even that eventually lightens up. I saw the first SAW and liked it well enough for being really intense, then it got to bee too much. I caught the last SAW though, and it was actually so over-the-top it was silly. I always liked the slasher genre because there was room for fun in there too.

What are some of your favorite horror movies? Any, in particular, influence your career?
Top Five: Nightmare on Elm Street 3, Cabin in the Woods, Scream, Freddy vs Jason, Evil Dead 2… there are so many. I think it is worth noting that in all my favorites, the good guys are almost superheroic. There’s an action-y, almost comic book-y vibe to my favorite horror films, and I think it probably influenced the Ninjas films in a big way. Is there a movie that directly influenced these Ninjas vs. movies, or was it just a wild idea you came up with?
Well, I have to give credit to my pal Daniel Ross for shepherding my crazy notions this whole time. He and I had this moment where we decided we wanted to make a flick and spent a day going through a Blockbuster (remember those?) looking for what was missing. Ninjas Vs Zombies was the result. I wrote the story and the screenplay, but Daniel was always there to tell me when my ideas were great and when they sucked… big fat donkey balls…

Why “monsters” this time around?
Well, we faced zombies and vampires and we had considered werewolves or something less horror, but we decided the best idea was to see the people who were behind all the zombies and vampires and the evil our heroes had to fight… and who else would it be in that case… Dracula and Frankenstein! Add a mummy and a werewolf and some witches (and zombies and ghouls and more!!) and the film becomes this big extravaganza.

Did you pull a Hitchcock and cameo in the movie yourself?
Not this time. I pulled more of a Mel Brooks and cast myself in a big role in Ninjas Vs Vampires (Reefer), but I’m more than happy to let our talented cast shine. (You can hear a lot of me at the popular TREKOFF podcast, which will be the focus of our next movie.) If you could’ve afforded any A-lister on the planet, who would you have put in the movie?
Ooh… that’s tough. We kind of have an A-List producer when it comes to indie horror in Eduardo Sanchez. The man made Blair Witch and Exists for goodness sakes! But acting wise? Either Bruce Campbell or Kevin Smith would have been fun. Neither would call themselves an A-Lister, but they are to me. Robert Englund, maybe?

Any ideas for a future Ninjas vs movie?
Ideas? Tons. But I think we’re gonna let our heroes take a rest after this one. We have TREKOFF coming up, and then some really cool and unique ideas I have never seen in indie cinema. For now… If the old Evil Dead flicks, or Kevin Smith films, or just fun horror (with a TON of Kung Fu!) were your cup of tea, you will probably dig Ninjas Vs Monsters. You can check us out on iTunes, Xbox, PlayStation, Comcast, and a ton of VOD outlets, as well as on DVD from Ninjasvs.com on February 3rd. (In the UK, find us on January 26th, on Amazon or VOD). Thanks so so much for reading this! Now go get the flick!