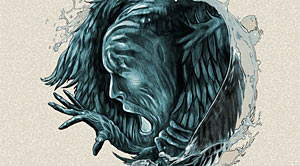 Get ready for some more In Flames and sink your ears into their latest song “Rusted Nail” from the upcoming Siren Charms, the bands eleventh studio album slated for release in September. The music video for “Rusted Nail” dropped exclusively at Loudwire, so you’ll have to follow this link to hear the sound waves for yourself.

The video was directed by Patric Ullaeus, which offers nothing that you haven’t already seen before. Just picture In Flames in a nice studio with big spotlights around them and smoke for the “wow” factor. If you think about it, the video could have been much sweeter if it was shot live. It could have also saved the band an additional day of shooting for it too. It’s a shame that it’s a bit lame, but at least the song is better than the previous one released, so I can live with it.

However, In Flames seems to be very pleased with it because it’s “raw” and “genuine.”

We are more than satisfied with ‘Rusted Nail.’ Patric Ullaeus, who directed the video, is someone we have worked with for several years, and we always get the best results from him. This video is a classic performance video that really sets the tone for In Flames 2014: It’s raw, it’s genuine, it’s In Flames.

Siren Charms can be pre-ordered at Amazon, and can be picked up elsewhere on Sept. 9th.