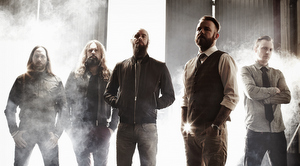 While we here at Yell! Magazine are gearing up to interview In Flames‘ frontman, Anders Friden, in the coming days, the Swedish band has just announced a set of new North American tour dates for 2015. (See the list below.) Hot on the heals of this current tour with Opeth and Red Fang, In Flames’ next leg will include Wovenwar and All That Remains.

We are having such an amazing time being on tour in the U.S. and sharing our stage with our friends in Opeth that it’s hard to believe how time flies and that there are only a few shows left this year. Therefore, its’ even better to be able to announce that we’ll be back at the beginning of 2015 to see all of you beautiful people again. Thanks to all of you for your support. You make us feel at home!

It’s great to be back with Wovenwar. They did a great job supporting us in Europe. Therefore, we are looking forward to take them out again in their home territory. Having All That Remains joining us as the main support means we’ll have a high energy package that we can’t wait to come back to the U.S. with.