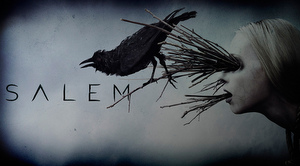 If you’ve tuned into WGN America’s new series, Salem, then you’ve likely heard the new Marilyn Manson track, “Cupid Carries a Gun,” play over the opening credits. I’ll admit that while we at Yell! Magazine usually support any crossover between heavy metal and horror, when I first saw those credits and heard Manson’s distinct style I couldn’t help but think how cliché it is. Not only that, but the tone the song sets for the show is wrong; a period show set in the 17th century being introduced by modern rock just doesn’t work for me. What does work is what we hear in Game of Thrones or American Horror Story:

The song ‘Cupid Carries a Gun’ was the last track we just finished for my new album. The occult and witchcraft [are] so often used in cinema with a heinous disregard for even researching its origins. However, I liked the themes of Salem. It looks at the witch trials without being cliché like most modern films.

Manson and I wrote a draft of ‘Cupid Carries a Gun’ shortly before I began working on the score for Salem. A couple weeks later I saw the title sequence and the song immediately came to mind. I showed it to Manson for fun more than anything, and it inspired us to finish the song that night. The next day I played it for Brannon Braga and he said that ‘Cupid Carries a Gun’ was the perfect tone and attitude for the show’s main titles.

Also, watch for Manson to make an appearance on Sons of Anarchy.

What do you think of “Cupid Carries a Gun” as the music for Salem‘s opening sequence? Does it work?