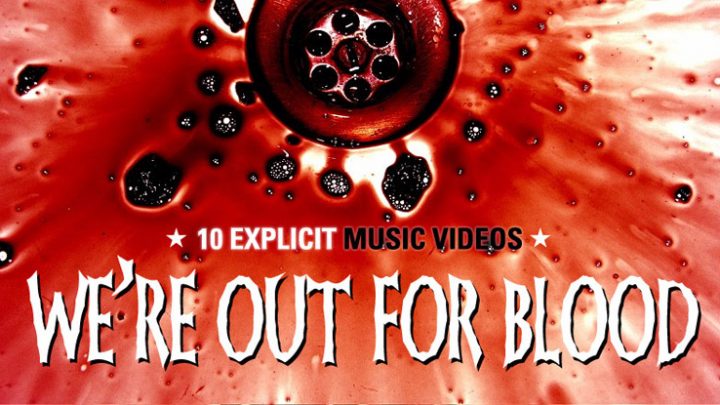 First off, when we say explicit music videos, we mean explicit. Many of the videos on this list contain buckets of blood, nudity, depictions of rape and murder, and, yes, even animal cruelty. If you have a problem with any of that, then you better just turn around and go back the way you came.

Second thing, we don’t participate in, condone, or suggest that any of our readers take part in any acts that are violent (don’t murder or rape anyone), that are demeaning or dehumanizing, that are disrespectful, or that are cruel to, well, anything. Basically, don’t do this shit at home.

The way we see it, these explicit music videos are collaborative expressions of the bands and directors making them. Whether the videos are artistic or not is not for us at Yell! Magazine to decide.

We did a similar list before, Top 10 Gory, Disturbing, And F#@%ed Up Music Videos, but those videos, while definitely disturbing, were less shocking than what we’re presenting today. This time out, we sought out some of the goriest explicit music videos in existence. Just like in exploitation films, there’s graphic depictions of disembowelment, rape, satanic ritual, copious amounts of blood, cannibalism, and more.

Again, before we get started with this list of explicit music videos, if you have a weak stomach, are easily offended, or you have a pacemaker, leave now! The horrors on display here are unlike those seen in an Alice Cooper or GWAR show.

Chop Chop by The Panic Beats from Dustin Mills on Vimeo.

Let’s start with something light, at least musically it’s light compared to the other songs on this list. With a pop-punk, Ramones-like sound, The Panic Beats have produced basically a short movie, complete with an exploitation-style title shot. Stalking, tortuous murder, and nudity – it’s a literal bloodbath.

Yes, you’re still being eased into the real gory videos on this list. I think the electro-industrial influence of Skinny Puppy is evident in many bands that followed, and while the video for “Worlock” may not have been composed of original footage, it was brutally violent for 1990. The video contains a vocal sample of Charles Manson reciting lines from The Beatles’ “Helter Skelter,” and scenes from many horror movies, including Deep Red, Suspiria,Tenebrae, Combat Shock, Phenomena, Opera, The Beyond, Hellraiser II, Bad Taste, Dead & Buried, Luther The Geek, Henry: Portrait of a Serial Killer, From Beyond, Parents, Death Warmed Up, Intruder, and Altered States. “Worlock” was banned worldwide.

Rammstein’s “Pussy” is a more explicit music video than “Mein Herz Brennt” (“My Heart Burns”) is, but this video is a visual mind-blower. With a The Cell meets Eyes Wide Shut vibe, this video makes no qualms about exploring, well I’m not entirely sure what it’s exploring. However, there are imprisoned children, some weird surgery, self-cannibalization, and something supernatural.

No.6 “Tarnished Gluttony” – Job for a Cowboy

Yes, this video contains an explicit disembowelment, but the whole scene only takes about two minutes in the nine minute video. What’s most disturbing is the father sacrificing his son.

“‘Tarnished Gluttony’ originally runs off the idea of blind faith into our government and monetary system. The director ran with the idea and spliced it with a H.P. Lovecraftian twist. The video streams the fascination of religion and the actions people justify in the name of religion, and this video is a spin on the old biblical tale of Abraham and Isaac, however, set in the world of Lovecraftian mythology. The point is, acting blindly in faith to a Christian deity is just as absurd as worshiping squid like monsters from space who live under the sea.”