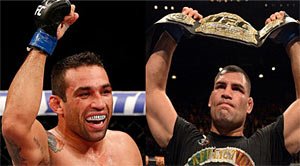 Two of the world’s fiercest mixed martial artists are set to let their rivalry play out in front of millions of fans as coaches on the newest season of The Ultimate Fighter, the UFC’s storied reality series, in the lead up to their title clash at UFC 180 in Mexico City. The series will premiere the week of August 18.

UFC heavyweight champion Cain Velasquez (13-1 in his professional career, fighting out of San Jose, Calif.), an agile and explosive heavyweight with a strong wrestling base, is currently the only heavyweight titleholder of Mexican descent in combat sports around the world. Often referred to as “the baddest man on the planet”, he is considered the greatest UFC heavyweight of all time thanks to career wins over former champions Minotauro Nogueira, Brock Lesnar and Junior dos Santos as well as Antonio “Bigfoot” Silva.

No.1 contender Fabricio Werdum (17-5-1, fighting out of Los Angeles, Calif. by way of of Porto Alegre, Brazil) is currently on a four-fight win streak that includes victories over fellow Brazilian jiu-jitsu ace Minotauro Nogueira, Fedor Emelianenko, Roy Nelson and most Travis Browne. A two-time Brazilian jiu-jitsu world champion, he is also known as a technical fighter with heavy hands. Outside of the Octagon, Werdum is seen across Latin America every week hosting the UFC Network’s weekly magazine show, UFC Ahora.

In this seventh international edition of the most challenging sports tournament on television, Velasquez will lead a team of four Mexican featherweight (135lbs) and four Mexican bantamweight (145lbs) fighters against Werdum’s squad of eight similarly divided fighters from other Latin American countries. The complete list of fighters will be unveiled in the coming weeks.

“I’m very excited about this – amazing talent is going to come out of Mexico and Latin America,” said UFC President Dana White. “This is a region we are working hard to develop. There is a lot of talent and a lot of great potential in multiple weightclasses. We know that the fans in Mexico and throughout Latin America will totally get behind this thing and it’ll blow up and it’ll be huge just like Brazil.”

The show which follows fighters training and competing against each other for a prized UFC contract, all while living under one roof, will air on Televisa Channel.5 in Mexico beginning in August 2014. UFC Network subscribers will also get the chance to catch replays and watch exclusive content on the channel as well as ufcnetwork.com.

José Baston, President of Television and Content for Televisa said:

“We have huge expectations from this partnership between the UFC and Televisa, to produce the new season of The Ultimate Fighter Latin America. This partnership allows us to reunite the vast experience and ability of both companies, for a project that we are sure will be a great success. I’d also like to point out the superb performance that the UFC Network has had since last year, a channel that has been transmitting at a pan-regional level by Televisa Networks. And emphasize that mixed martial arts is one of the new sports with the highest growth, for Televisa it is very important to be able to offer it to its audiences.”

The coaches, UFC Heavyweight Champion Cain Velasquez will battle No. 1 contender Fabricio Werdum for the heavyweight championship title at the Arena Ciudad de Mexico in Mexico City on Saturday, November 15, in the main event of UFC 180. The main card will also feature the final featherweight and bantamweight bouts of the series, crowning the first ever winners of The Ultimate Fighter Latin America. Further event and ticket details will be released later this summer ahead of the scheduled on-sale in the final week of August.

“For me, it’s an honor to be named the first coach of The Ultimate Fighter Latin America,” said Velasquez. “I’m excited to share my experience and help train a young team of up and coming Latin American men. And then, to be able to do something I’ve always dreamed of doing, defending my title in Mexico in November, will be a dream come true.”

There is nothing Werdum would rather do:

“To have a shot at the belt is all I ever wanted and knowing it’s against Cain makes it even better. Fighting for the heavyweight title and coaching against Cain in The Ultimate Fighter Latin America is like having two dreams come true.”