Persist Interview – “And The World Will Listen” 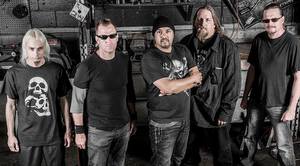 Persist is a hard-rocking Canadian band with ambitions to fill stadiums… and they’re willing to do the work to get there. With an EP and a recent tour with Five Finger Death Punch already under their belt, Persist is putting together their debut full-length album (featuring appearance from a member of Soulfly), which will be out in 2014.

The band plays a style of heavy metal that’s not far removed from the post-grunge era of the late ’90s, if not more melodic. In reality, though, you’re going to find a lot of elements from a variety of heavy metal/hard rock genres. They also have that distinguishable yet intangible element in their sound that makes them uniquely Canadian.

You can keep up with Persist at their official site or on Facebook.

Go grab yourself a cold one and enjoy the Persist Interview.

The band was formed in 2006, by Jerry and Frank back in Thunderbay. They had a dream to become a stadium band so they decided they needed to make the move to Toronto to find like-minded musicians. The band played many shows with different configurations until 2008, when they met vocalist K.C. Lee from one of many online musician searches, this one happened to be in kijiji, the free online sales site. In 2011, KJ and Christian joined the band and that is the lineup that has really made a name for the band. From 2008-2011, the band was relentless, playing every showcase/battle of the bands or indie night we could book. Once we made a bit of a name, we added about 15 covers to our original songs and started playing full nights in bars with a 50/50 split of music.

Once recording an album became our focus, we reduced the amount of live shows we were playing and really began to focus on our sound and finding the right producer and studio to complement us.

The name Persist pretty much speaks for itself, it is a band name and also a call to action. Everyone has obstacles in life, but if we are doing what we believe is right. It won’t always be easy, but you need to Persist. “And the world will listen” just flowed off Jerry’s tongue one day and we have stuck with it as our motto and it helps us to see our goal, the light at the end of the tunnel. There is no such thing as an overnight success; all the bands that seem to come out of nowhere have been slugging it out for 5 to 10 years before they really see the spotlight. So many bands get frustrated and give up, but we really believe in our music and that’s what it all comes down to.

You recently got off “The Wrong Side of Heaven Tour” with Five Finger Death Punch, Escape The Fate, Miss May l, and Gemini Syndrome. How was being part of that tour? What was your biggest struggle on tour? What was the highlight of the tour?

The tour was amazing… they are all great bands and to be on a tour with a band like Five Finger Death Punch really puts everything into perspective as far as how a band can go from playing bars to headlining all over the world. They are one of the fastest rising bands in the Metal/Hard Rock genre and they are 100% professional and supportive of all the bands on the tour. We were added to the tour late for the Canadian shows because they felt the tour should have some local content and that says a lot about them. Supporting Canadian Music and not just by liking posts on Facebook, but by giving us stage time in stadium shows. The biggest struggle would have to be the schedule: we played 7 shows in 9 days, some had 11-hour drives in between, so it was very taxing. The highlight was seeing how many fans we had out West. We toured with FFDP and Soulfly in 2012, and so many people remembered us and came up and said hi again, it was amazing and humbling.

Persist has been all over Canada and now into the U.S., tell me honestly what you prefer playing, in small towns or on big tours in big cities? Do you find a difference in the fan types and volume? How does it feel to be a hardcore Canadian band playing shows into the U.S.?

We prefer big shows in stadiums; we have a huge crushing sound that is sometimes too big for many of the venues we play. In stadiums, after we play, we hang out at the merchandise booth and meet the fans so you still have the interaction but there is nothing like a stadium setup to bring the noise. We find the fans in Western Canada to be the loudest for sure, Dawson Creek and Edmonton really have an energy that is hard to beat. We played the Joint- Hard Rock Hotel and Casino Las Vegas and I found the fans really went out of their way to acknowledge the Canadian band on the tour, which was nice but it’s really hard to top a Western Canadian party. It feels amazing being a hardcore Canadian band representing our home. We always put a maple leaf in our t-shirt design somewhere because we are proud of our roots and love the Great White North.

You have regularly showcased your talents in support of great benefit shows; do you have any plans in the works for more shows like these? Your websites hint at work to help “SickKids.” Can you tell me a bit about that?

We just always try to help out good causes whenever our schedule will permit it, we love to play, so if we can use our music to help promote a good cause, we are happy to do it. You really do meet the best people at these shows and make some real bonds. This year we are playing a show for the Blue Sky Search and Rescue assistance society that puts it’s efforts into finding the lost family members you see pictures of on the back of trucks, on cereal boxes, and in stores, and we are playing a benefit for the CP24 kids Christmas toy drive as well hoping to make the Holidays better for kids in the GTA [Greater Toronto Area].