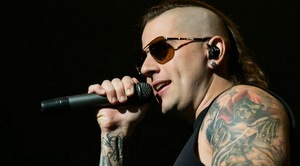 It’s no secret that Avenged Sevenfold, despite the huge success that they’re experiencing, are the laughingstock of the heavy metal community. It’s also no secret that I have zero love for them in any aspect or regard. Avenged Sevenfold’s frontman, M. Shadows, has fired back to all the “haters,” and I say good for him for standing up for himself and his bandmates. However, what this band has to remember is that huge success comes with a giant side of hate. It’s probably best to keep your mouth shut, no matter how much you want to protest. It’s like what mom always said about the schoolyard bullies, “Ignore them and they’ll eventually leave you alone.”

After you read the comments M. Shadows made to Metal Hammer in a recent interview, I’d like to address a couple issues I have with them:

No other metal band is doing what we’re doing. We’ve all heard people in bands, who I won’t give any publicity to, shouting their mouths off in recent months, but fuck the haters. People know that they’ll get more attention by talking shit about us and if that’s the way they want to run their bands, that’s fine, but it’s not what we would do. We go out there and kill it every night and you can see what this means to people.

I’ll give publicity to the “people in bands” who’ve spoken out about Avenged Sevenfold’s latest album; I might be wrong, but it seems pretty clear that he’s talking about Robb Flynn of Machine Head and what he wrote in his General Journals. First of all, Flynn said he liked the new record and called Avenged a “good band.” He said so upfront before getting into his digs about the new album, which were in good fun, in my opinion. What do they say? If the truth hurts…

Then there’s the thing about how Avenged does things, such as not lashing out at other bands. I think the fact that I’m discussing this quote makes that statement a direct contradiction.

I don’t question the hard work that Avenged has put into their band and that they put into every performance they do. It’s tough being on top, and when you are, you have to learn to roll with the punches. Making statements like Shadows has made will only bring more hate, and if we’re lucky, it’ll help Avenged disappear even faster.