Is Robb Flynn Out Of Line With Alexi Laiho’s Response Letter About The Tour Cancellation? 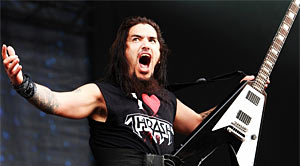 Last month, some of you learned that Machine Head went ahead and canceled their U.S. tour with Children of Bodom, Epica and Battlecross. Apparently, the Oakland metallers are heading back into the studio to finish up their upcoming eighth full-length album, Bloodstone & Diamonds, which is due out on November 7, 2014.

The idea of cancelling the tour may sound like a great idea for Machine Head, but it’s easy to understand that the situation sucks for the other bands, including the diehard fans. This is a mess that requires re-planning on everyone’s end. Keep in mind some these guys have families to deal with too, so you should understand the levels of frustration. Children of Bodom’s frontman, Alexi Laiho, already responded to the situation with class. However, Robb Flynn fired back negatively at Laiho’s response and COB fans who are bitching about the cancellation.

Below is Robb’s full response, which was pulled from his recent General Journals entry:

For a band, [Facebook] is broken down a bit different. There are of course the diehard supporters. They’re first and foremost. There also exists a large group of “I’m-not-really-sure-if-they-are-fans-or-not,” and last and certainly least, there’s the people whose sole purpose is to troll your page. Like, I don’t know… let’s say the Children Of Bodom “Hate Crew” that has been out in full force in light of the US tour being re-scheduled. It’s typical shit talking, albeit a ton of it to the actual Machine Head fans saying ‘how much better Bodom are than Machine Head’ and how ‘Bodom should’ve been headlining over Machine Head’, and “fuck Machine Head”.

However, most people usually need the motivation to act like fools and Alexi’s little bitch-ass response certainly got the “Hate Crew” fired up.

But to the weak attacking the MH castle? Whatever… we’ve got the Head Cases, the fucking MH diehards, armed to the teeth and defending us to the bitterest of deaths.

For every person that complains about the tour getting canceled the Head Cases are like “shut the fuck up, life goes on, M F’n H to the death!!!” So for every one of those people, I thank you VERY much. Truly, from the bottom of my heart, I appreciate the fact that you do that. Because shit DOES happen and sometimes life DOESN’T go the way you want it to.

Is Robb Flynn out of line here? Let us know what you think in the comment section right below.