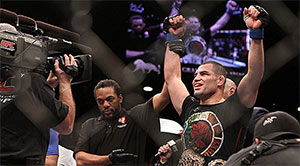 UFC 155 was the last face pounding pay-per-view event of the year that took place last night at the MGM Grand Garden Arena in Las Vegas, Nevada, and a new UFC Heavyweight Champion was enthroned.

Junior dos Santos and Cain Velasquez both stepped inside the Octagon knowing a knockout was inevitable since their first match lasted 64 seconds in round one, but surprisingly the bout last night went all five rounds, which exhibited the determination of Velasquez to get the strap back from the UFC champion, and that Dos Santos has a mind and body of an Ancient Greek Warrior. Velasquez hands down dominated the rematch against Dos Santos in every form imaginable in the MMA. Just take a look at Junior’s face pictured above or watch the fight video highlights right below, if you happen to miss it last night.

In the post-fight presser for UFC 155, Dana White stated that Dos Santos has a broken jaw to deal with, and that his face will look far worse in the hours to come. White also hinted that a trilogy would be awesome to have sometime in the future.