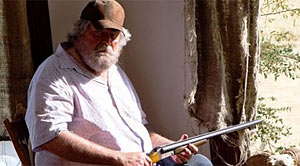 The staff at Yell! Magazine would like to wish everyone (yes, including you) a Bloody Merry Christmas and happy holidays. With that said, I’m guessing you didn’t expect a little Christmas goody from us today. Well we figured we would try to deliver one last update because all of you who have supported us over the last two years deserve more. It has been a great year for us in terms of keeping the site undead with fresh meat daily, and we also made plenty of new friends on our official Facebook fan page.

Above we have a new photo released by Lionsgate that features the original Leatherface, Gunnar Hansen, unmasked and ready to deliver a few rounds of shells in Texas Chainsaw 3D. Hansen along with Marilyn Burns, Bill Moseley and John Dugan have a cameo in the new film directed by John Luessenhop, which opens in theaters on January 4, 2013.

Have a look at Gunnar, not Santa Claus, and drop us a comment or two about it below.