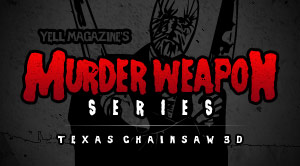 In horror films, the cause of death usually seems pretty apparent. Knife in the chest. Rope around the neck. Hammer to the skull. But did you really see what you think you saw? Do you know the real culprit behind the grisliest of murders? That’s where I come in. I’m Daniel Dockery, Horror Lawyer, and I’m here with

Today, we have a scenario from Texas Chainsaw 3D.

In the movie, a young hitchhiker, Carl, has his head bashed in with a sledgehammer by Leatherface. At first glance, it seems like Leatherface is the killer. In Texas, being cut in half with a chainsaw counts as a natural death. It happens so frequently that you get suspicious whenever someone dies without a power tool nearby.

But, if you look closer, Leatherface was just following his natural tendencies. He was simply a small cog in the grander machinations of the real killer: That, ladies and gentlemen of the jury, is what killed Carl in Texas Chainsaw 3D. Allow me to explain.

Heather has a history of being stupid and attracting stupidity. Her works of art consist of her slowly lining small bones next to one another in front of a piece of someone else’s art. When she and her friends hit a man in the rain with their car, their first response is to take the money that he offers, because getting run over doesn’t warrant a ride, apparently, and take him immediately to hang out in her grandmother’s house.

Carl was a thief, and you might say that that fact puts a strike against him. But this is a man that hitchhikes hundreds of miles to steal someone’s forks. He is either the worst thief in history, or what’s known as a kleptomaniac. He can’t help that whenever he sees something shiny, he wants to put it in his backpack. He struggles to fight the beast inside him every day. And on the sunny Texas day that the murder occurred, he was losing that battle.

The strike should really be put against Heather for allowing him the option of not sticking around when she and her friends went to go buy party supplies. “We have to go get some liquor and steaks. Who should unpack the stuff. How about you, hitchhiker? Yes, guy who has said less than 10 whole sentences since the night we collided into him. You’d be perfect for the job.”