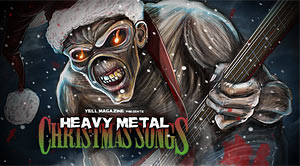 We’ve mixed up our presentation of Heavy Metal Christmas songs, so you’ll get a bit of it all. Naturally, there will be some that you would have included on the list, and we encourage you to post a comment about it, but these are the ones that we’ve gravitated toward in the last couple of weeks.

No.10 Christmas with GWAR

GWAR needs no introduction, but their costumes aren’t exactly festive. This video clip is less of a Heavy Metal Christmas song than it is a skit that could be aired on Letterman. It’s a lot of fun, and whether it was staged or not, I want GWAR to go carolling in my neighborhood.

Heavy Metal and symphonies were made for each other, a fact the Trans Siberian Orchestra has proved over and over again. “Christmas Eve/Sarajevo” (a blend of “Carol of the Bells” and “God Rest Ye Merry Gentlemen”) is an epic piece that’s beautiful and traditional, presented with an edge and intensity brought on by wailing electric guitars. TSO has been touring their acclaimed metal opera “The Lost Christmas Eve” for the first time ever this year, and there are still a few dates remaining. If you’d like to check the remaining dates and get tickets, visit this link.

No.8 “Mistress for Christmas” – AC/DC

Probably more by accident than anything else, AC/DC ended up with a Heavy Metal Christmas song on the 1990 album The Razors Edge. As usual, the lyrics are about women and sex.

Naturally, you can’t have a list of Heavy Metal Christmas songs without a little evil on it, can you? Enter Venom and “Black Xmas.” How can you not get in the spirit with the following chorus?:

Just as I nearly had a heart attack because of the awesomeness that is Silent Night, I now know that you can’t have Christmas without a bit of horror. Hammer Films legend, Christopher Lee, offers up not one, but two Heavy Metal Christmas songs. Seriously, they guy is nearly dust and bone, but he’s still hot his edge. Check him out on the promo video.

Ready to see what else is on our list of Heavy Metal Christmas songs? We saved some of the best classics for last…