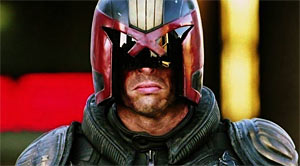 Apparently, this version will loosely follow the comic book, and will blow the lid off the 1995 film that starred action hero, Sylvester Stallone.

You can grab the animated poster from the official DREDD website, or from the embed option right below, and place it wherever you would like. Remember to also check out, if you happen to miss it earlier, our 2012 Summer Blockbuster Movie Preview which, we happen to pick DREDD as the number one movie of this summer.

Dredd takes place on a fictional Earth created as a result of the Atomic Wars. Survivors of this period are living in Mega-Cities, which protects its citizens from the Cursed Earth, a radioactive desert environment populated by mutants. The main story takes place in Mega-City One, where the police who are now called judges have the power to use police brutality to some extent to fight extreme murders. One man, Judge Dredd (Karl Urban), a senior law enforcement officer, teams up with a cadet called Judge Anderson (Olivia Thirlby) to track down a terrorist organization lead by Ma-Ma (Lena Headey), who is responsible for selling a reality-altering drug called Slo-Mo.