If you’re going to kill someone, you might as well do it with some degree of flourish. Everybody can shoot a gun or throw a punch, but it takes a special kind of man to wield a blade of pure plasma energy wrapped in a containment field. That’s a lightsaber, for all you non-geeks. Oh yes, you can see where this is going. Gird yourselves, readers, and watch out for low-flying Frisbees of death that will leave your neck stump a pulpy, gushing blood geyser… it’s about to get deadly up in here!

You know it’s going to be a bitchin’ list when the number 10 spot is occupied by a weaponized sex toy. Featured in the Quentin Tarantino/Robert Rodriguez collaboration From Dusk Till Dawn, this baby is not only a fully-operational vampire stabber, but it’s also customized for maximum penetration. Well, not really. In fact, that was a disgusting image. Go clean out your frontal lobes. Seriously, I’m not proud of that one and my mom reads these things.

So, George Clooney and Co. stop at this on-the-border titty bar only to find out it’s main act features vampires and even more vampires. Also, a nearly nude Salma Hayek. So it’s a real good-news/bad-news type situation. In any case, Clooney does what any potential vampire snack should do and arms himself with a wooden stake. But, not satisfied with its lethal quotient, he then MacGyver’s the shit out of that thing by shoving it down a pneumatic sex toy… thing… whose actual name I’m sure readers will point out eventually… and goes to town on several dozen bloodsuckers.

If you haven’t seen this movie, let me remind you that this entry contains the words “sex toy,” “Salma Hayek,” and “vampires.” Seriously, why aren’t you out renting it yet?

NOT ribbed for her pleasure.

For all of you uncool people out there wondering what the heck a “Glaive” is and whether or not you can smoke it, brace yourself for some enlightenment. The Glaive is Prince Colwyn’s weapon from the 1983 fantasy classic, Krull. Shaped like a starfish, only jewel encrusted and with spiky bits on each arm, the Glaive can be thrown like a Frisbee, will spin around the room decapitating foes willy-nilly and will always faithfully return to its owners hand, presumably (and preferably) without severing said owner’s fingers. 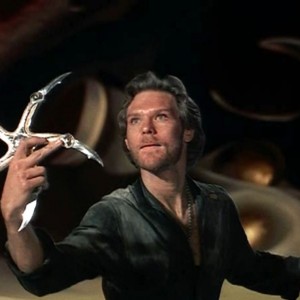 The only reason the Glaive isn’t higher on this list is because of the general population’s lack of knowledge concerning the movie Krull. Sure, it’s one step above an abstract concept like the Force, but you mention Krull to any random person on the street and they’ll give you a funny look. Also, some spare change depending on how scruffy and/or crazed you look that day. I always end up getting about a buck fifty. But still, it’s an awesome weapon that deserves to be on the list.

Bonus points: in the immortal words of A Christmas Story, there’s a good chance you’ll “put your eye out with that!”

“And this guy doesn’t have that many to spare.”

If there’s one, bright shining spot in Sylvester Stallone’s 1995 magnum opus Judge Dredd it’s this drool-worthy piece of hardware. Capable of being fired full-auto, single-shot or at ludicrous rapid-fire, the main weapon of Mega-City’s police force, the Judges, is also able to fire off flares, rockets, ricochets rounds, and a heat-seeking partridge in a pear tree. Ok, probably not that last one, but can you imagine?

As a bonus feature, it’s also seemingly capable of being fired non-stop for extended periods of time without reloading. Granted, that’s true of most movie guns, but it’s like the Lawgiver took a peek at the firing time of all other guns in existence, went “Pussies!” and kept on spitting bullets for several hours just out of sheer spite. With all of its firing options, it’s a wonder the Lawgiver doesn’t just shoot other, smaller guns at its targets. Seriously, look at the size of it, it’s like two huge guns had sex and nine months later this thing came out.

Even Stallone thinks this is overcompensating for something.

There are very few items in this world that are horrifying enough to qualify as a gateway to Hell. There’s the Holland tunnel, which leads unfortunate souls to the land of the dead known as Jersey. There’s the entirety of Florida, which seems to be nothing but a place for the nearly dead to live out their days in a sort of celestial holding pattern. But in the world of fiction, specifically the Hellraiser universe created by author Clive Barker, gateways to Hell are common and numerous, but none are as famous as… the Box.

First introduced in Barker’s 1986 novella The Hellbound Heart, The Lament Configuration pictured above is only one of many puzzle boxes created by Phillip LeMarchand, an 18th century French toymaker. Infused with dark magic, LeMarchand’s boxes are specifically designed to appeal to the darkest desires that reside inside the human heart. Once an unlucky victim comes into possession of a box, it begins to taunt him (or her, demons don’t discriminate) with promises of endless pleasure… to be obtained once the owner figures out how to activate the item’s enchantments.

But there’s a catch. Isn’t there always when dealing with dark forces? To paraphrase the Marquis DeSade: “Pain can be as good as pleasure if properly applied.” Unlocking the box brings forth the servants of the great God Leviathan: Cenobites, and they WILL tear your soul apart, they’ll rip into your flesh until you LOVE it.

Beware the box! If you open it, the Cenobites have “such sights to show you…”

It ain’t sugar and spice and everything nice in there.

Actually, let me rephrase that: clowns scare the living fecal matter out of me. Even when I was a kid, I knew there was something odd about a grown man slapping on a costume and enticing kids to come sit on his lap. Or am I thinking of Santa? I have issues with that bastard too. Anyway, even without any special accoutrements, clowns are Satan’s own harlequins. But you throw in some weaponry and we’re talking a whole new level of fill your pants, go home crying to momma, years in therapy kinda of fear here. Enter: The Killer Klowns From Outer Space.

A little known cult movie from 1988, Killer Klowns features a bunch of alien… clowns, that have come to Earth because they crave the taste of human blood. No, really. Their whole stichk is to use their advanced, alien weaponry to cocoon their hapless victims inside gigantic, pink cotton candy casings. And if that’s not humiliating enough, they’ll then stab you with a ridiculously oversize Krazy Straw and suck your blood out!

Before moving on to the next item on this list, let me leave you with a guaranteed nightmare for tonight: