Bully Boss? Here Are 10 Heavy Metal Songs For That Asshole 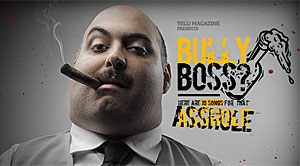 It doesn’t matter who you are or where you come from, everyone has some asshole who tirelessly tries to put you down. It could be the kid down the street, the schoolyard bully, the insecure teammate, a friend who lacks social skills, or the bully boss, it doesn’t really matter because they are all one and the same.

I’m using the bully boss example here because, well, that’s my experience. You can reapply the sentiments contained herein to any dumb-fuck douchebag who gives you a hard time.

My bully boss was a pasty, lanky, anemic, Mr. Burns-looking “man” of British descent (nothing against the British; it was just a fact he carried around like a chip on his shoulder). I love the Mr. Burns reference because that’s just how he looks, sickly – but only about 50 years younger than the estimated age of the fictional character. Having to deal with this guy on a daily basis was about as enjoyable as sticking slivers of bamboo up your urethra – I know because I’ve done both. Even one of the saner members of our team made the analogy that he was like a drunken stepfather while his intimidating ways practically forced his immediate subordinate into the enabling-mother role who hushed her children so as not to provoke a drunken rage. No joke – it was that bad.

Me on the other hand, I always said he was the guy who lucked into a position of authority and misused his power to get back at all the years of adolescent torment he suffered from the bullies who shoved him in a locker and flushed his head in the toilet on a daily basis. But his tyranny isn’t the only way his insecurities have manifested: he also has had chameleon-like style transformations, unhealthy obsessions with certain men of style, and strange pursuits of becoming more “classical” as a man.

From public humiliations to unjustified firings to reprimanding someone for medical conditions to false performance reviews to group badgerings, he ran the gamut and without going into detail I can’t convey his cruelty. I can, however, say that I’ve often held fantasies of kicking him in the back of his smug head, repeatedly smashing his face into his keyboard, stabbing him with an icicle, paying a homeless guy to jump him, but nothing as graceful as an MMA move – I just resort to street violence.

While dealing with my bully boss I often found comfort in my music. As any metalhead knows, solace or peace can be found in our music. Sure, it can be violent and angry at times, but that’s often just what we need to vent. A feeling that someone else has experienced something similar or felt the rage that we feel. That’s what the following 10 songs did for me. My bully boss hated the fact that I listened to music through my headphones at work, making it a bitch for him to get my attention, but little did he know that my music might have been the only thing saving him from a ruptured spleen.

If you’re dealing with a bully boss, or any other kind of bully, here are 10 songs that either contain some interesting lyrics you can dedicate to him or her or use for inspiration. They helped me deal and I hope they’ll do the same for you.