Arch Enemy Has A New Guitarist 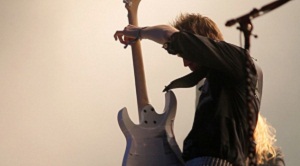 As Chris Amott parts with his brother Michael Amott and the rest of Arch Enemy, Nick Cordle of Arsis joins the band. In an interview with IHeartGuitar.com, Michael explains that Chris announced to the band back in October 2011 that he was going to split.

According to Michael, there’s no drama here, just that:

[Chris] hasn’t been that happy playing in Arch Enemy for a while, and music is supposed to be fun. The rest of us love it and live for it, and if one guy doesn’t, then that kind of affects the whole atmosphere in the camp. So this is really for the best.

Michael apparently had Nick Cordle in mind since 2010 (if ever Chris were to “quit” again). When the time did come, Michael asked Nick to send some videos of him playing Arch Enemy songs.

I thought he was going to send two or three songs but he… picked our entire current setlist and went through them all. He had pretty much everything note-perfect. … He came over and started playing with us… [and] the first thing we did on the first day he got here was to run through the whole live setlist and it sounded great. He nailed stuff, didn’t miss any cues.