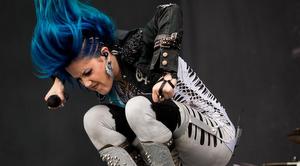 We arrived at Scene Heavy, that’s the stage that Arch Enemy would be playing on, a little early, and at that time performing on the adjacent stage was punk legends, Strung Out. I’d noticed that the sound was off, but figured that it was because we weren’t standing in front of their stage. However, when Arch Enemy took the stage it became painfully obvious that there is a problem with the sound here today: it’s too quiet, the bass is too high, the PAs are too soft, and the guitars could hardly be heard. This, however, is no fault of Arch Enemy’s, and the sound did improve as the performance continued, but only marginally. This was our first time seeing Arch Enemy with Alissa White-Gluz, formerly of the Montreal-based band The Agonist. With her Quebecois Francais between songs, it was clear that she was extremely excited to be performing in her hometown, and nothing made it more evident than when she marched across the stage waving the Quebec flag. Shit, even her hair was Quebec bleu. She’s no Angela Gossow, but she does a fine job and she made Quebec very proud today.