Halloween Party Songs That’ll Please The Most Devilish Among You 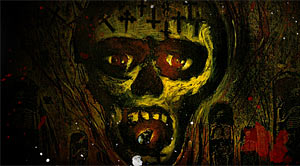 It’s probably safe to assume that you’re not trick or treating, but that doesn’t mean you’ve lost the spirit of the season. If you’re older than 15 and still dressing up, you’re likely answering the door or, more excitedly, attending or hosting a Halloween party. Among the many factors of a successful Halloween party is the host’s musical selection. And if your like most, you’ve probably fell victim to believing that “Monster Mash” is all you need to be successful with your Halloween party songs playlist — it’s not even required. Apologies to TheMatt, who happened to request this yuppie staple. Do that again and it’s this for you:

Onto the list of Halloween party songs. It’s a bit of a mix; it includes some classics, some surprises, and some unusual selections. It’s my belief that Halloween party songs don’t need to be the center of attention, as they can serve their purpose as background music just as well as an uptempo boogie track.

Enjoy this best-as-we-can playlist at your Halloween party.

Hailing from Hungary and the ruins of Los Tiki Torpedoes, The Hellfreaks have entered the genre of psychobilly, which isn’t something that Yell! Magazine usually dabbles in. However, “Boogie Man” has a distinctly horror-themed intro and the slap bass is super sweet. Besides, you’ll need at least one of these types of Halloween party songs to keep your party well-rounded. Sure, The Hellfreaks are kind of capitalizing on sex, what with Shakey Sue on vocals and especially with the addition of “graveyard dancer” Cherry Blossom (Hungary’s Number 1 burlesque dancer), but the music is still tons of fun.

I believe that the spoken-word intro of “The Number of the Beast,” let alone the title of the song, has led many to believe that Iron Maiden are/were Satan worshippers. Ha! The intro wasn’t performed by horror legend Vincent Price (his contribution to music is on MJ’s “Thriller,” not on this list), however, it was done in his spirit by theater actor Barry Clayton. Anyway, everyone loves this song and it fits in nicely with a Halloween party.

Peter Steele – RIP. This song was my inspiration for this list of Halloween party songs. I always thought that it would make wicked ambiance music. If you can’t imagine a massive demon bound in chains marching back to his Hell prison, you have no creative blood. The chant adds a nice somber feel to the song, and there’s a constant sound that seems to be ripped from Star Trek’s transporter.

No.10 “Zombies Ate Her Brain” – The Creepshow

If you’re going to play our Halloween party songs in the order presented here, you’ll need The Creepshow’s “Zombies Ate Her Brain” to wake up your guests after Type O Negative’s track. Hailing from Ontario, Canada, this psychobilly band (I know, twice, on the same list, but it’s a genre almost entirely dedicated to horror) primarily takes its inspiration from horror films.

OK, getting a bit more serious here with the horror in music. Slayer’s “Dead Skin Mask” deals with the true-life horrors of Ed Gein (born in my hometown of La Crosse, Wisconsin), who is often mistakenly referred to as a serial killer and was the inspiration behind such cinematic icons as Norman Bates, Leatherface, and Jame Grumb (aka, Buffalo Bill from Silence of the Lambs — you know, the penis-between-the-legs guy). Anyway, Slayer’s song is musically creepy (diabolus in musicus) without the child-like voice talking to Mr. Gein.

Another diabolus in musicus track for our Halloween party songs. The inspiration for “Black Sabbath” is one of nightmares; apparently Ozzy gave Geezer a book on witchcraft. After reading it, Geezer put it on his nightstand and waking up during the night he saw a black figure standing over him. When he went for the book, it was gone. Yeah, so, not much gets creepier than a storm and church bells.

No.7 “Welcome to my Nightmare” – Alice Cooper

What list of Halloween party songs would be complete without the original shock-rocker? Alice Cooper’s “Welcome to my Nightmare” isn’t so much scary in it’s mid-’70s disco vibe, but lyrically, that’s a different story. The way I interpret it, is that it’s about a serial killer talking to his victim. “We sweat, and laugh, and scream here./’Cause life is just a dream here.”

See the top Halloween party song picks on the next jump..