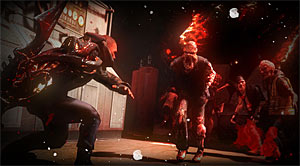 Things are about to get “real” as Activision Publishing confirmed today that PROTOTYPE 2 — Radical Entertainment’s highly anticipated open-world/action thriller — will be playable for the first time ever at New York Comic-Con in the Activision booth (#738). In addition to giving fans a first taste of what PROTOTYPE 2‘s new shape-shifting protagonist Sgt. James Heller is all about, Radical will also showcase part two of the game’s stunning three-part CG trailer series at www.prototypegame.com on Friday, October 14th, and has revealed the innovative online Infected monster creation tool, PROTOTHINGY.

“A few months ago, we let our fans see PROTOTYPE 2 for the first time at San Diego Comic-Con, and now we have put together two great playable missions for New York Comic-Con,” said Ken Rosman, Studio Head, Radical Entertainment. “The first mission touches lightly on Heller’s story, while the other is something we call a ‘Rampage Challenge’ — where it’s all about the action and players can compete for the best score. Both missions will give fans an initial taste of what’s in store when the final version of PROTOTYPE 2 comes out in April next year.”

The PROTOTYPE 2 team will also be hosting a Twitter sweepstakes during New York Comic-Con for a chance to win a one-of-a-kind James Heller custom-skinned Xbox 360 video game and entertainment system from Microsoft. Users who Tweet any message containing #PROTOTYPE2 between 12:00 a.m. (Eastern) Thursday, October 13th, through 11:59 p.m. (Eastern) Sunday, October 16th, will be automatically entered into a random drawing to claim the prize. The lucky winner will be announced at midnight on Sunday, October 16th. Additionally, the team from Radical will be on-site at the show handing out assorted PROTOTYPE 2 goodies, including T-shirts, posters, giant foam Heller Blade Arms, and more!

Beyond the first-time playable PROTOTYPE 2 goodness on the show floor at New York Comic-Con, Radical Entertainment is also extremely proud to announce the online Infected monster creation tool PROTOTHINGY — an all-new way to become an even more hardcore PROTOTYPE fan. With PROTOTYPE 2‘s online monster creation tool, users can mix and match from a hilarious library of Infected arms, legs, eyeballs, props, and more to piece together their very own Infected beast. Head over to www.facebook.com/prototype to create and upload a unique specimen to the PROTOTHINGY gallery for friends, family, and other users around the world to see.

For those unable to make it to New York Comic-Con, or who would like to find out more about PROTOTYPE 2, check out www.prototypegame.com for the latest trailers, screenshots, special promotions, and more! And for the truly dedicated, go to facebook and join the PROTOTYPE Army — a community of over 330,000 (and growing) fans that receive constant updates from the team at Radical, and early sneak peeks at new information and assets.

The sequel to Radical Entertainment’s best-selling open-world action game of 2009, PROTOTYPE 2 takes the unsurpassed carnage of the original PROTOTYPE and continues the experience of becoming the ultimate shape-shifting weapon. As the game’s all-new infected protagonist, Sgt. James Heller, players will cut a bloody swathe through the wastelands of post-viral New York Zero (or more simply… NYZ) with unparalleled locomotion, building up a vast genetic arsenal of deadly, biological weapons, and abilities as they hunt, kill and consume their way toward the ultimate goal — to kill… Alex… Mercer!