Original Gangstaz Review For iPhone – Or: Yo Dawgs! Be Cool! Don’t Start None, Won’t Be None! Chill, Ya Dig! And Other Such Utterances 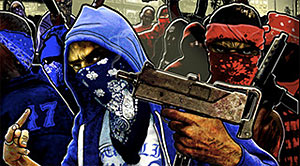 If I play another zombie or tower defense game I’ll spontaneously combust. And the bosses wouldn’t like that, they just had the office vacuumed and nothing gets ash stains and melted down human fat out of the carpet. I had to learn that one the hard way. Funny story. I’ll tell you some time. Luckily, there’s another popular genre filled with fun titles out there that doesn’t involve either undead or fortifications. I call these games Lifestyle Simulators. Original Gangstaz is one of the best, it’s currently available in several different flavors, all of them free, on the App Store.

You are [Enter Badass Hood Name Here] and you can progress through the hallowed halls of Gangsta’s Paradise in several different ways. Completing missions nets you XP, cash and trinkets to outfit your chosen bad boy with. Playing amateur slum lord by buying real estate (read: crack houses, crack whore houses, etc) gains you huge sums of cash at regular intervals. Fighting rival gang members and the occasional boss character that pop up when participating in missions rounds out the overall experience.

Damn it, mom! Stop popping caps in my ass!

It’s nothing new. It’s the basic Mafia Wars formula with a hoodlum twist. What sets Original Gangstaz ahead of its competitors is the atmosphere. Graphics are appropriately sleazy, with half-naked chicks serving to illustrate everything from bodyguards to chemists.

One’s a biochemist, the other one’s a ho ho ho’.

The sound effects are great, especially the mission-centric ones which are on-topic yet strangely chuckle-worthy. Boss characters are hilarious parodies of popular real-life artists. Fiance is a Beyonce clone, 6-Pack is an obvious nod to Tupac, so on and so forth. Leveling is fast in the early going, slows down considerably in the mid-fifties and picks up once you pass the 100 marker. Speed depends on the type of player you are. Pumping all my points into fighting rival gangs didn’t seem to work for me, dumping everything into stamina for missions and defense to ward off attackers seemed to be the fastest way to level. You can of course purchase boosts, stat recharges and several other items in the game’s online store, all of which will cost you anywhere from a measly buck to a Franklin. Daily lotto tickets are awarded for logging in, which earn you cash or powerful items.

Aw, another freaking Uzi. I know what the kids are getting for Xmas this year…

I absolutely love Original Gangstaz and plan on keeping it on my iPhone for the long term. The music, the graphics, the atmosphere dripping with dirty, sexy charm… It’s a keeper.