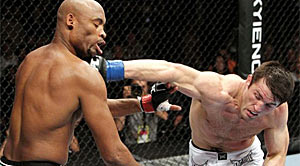 The UFC and NeuLion, announced the launch of their new UFC.TV App for iPhone and iPod touch, making it even easier for fans around the world to watch live pay-per-view events starting with UFC 148: Silva vs. Sonnen on Saturday, July 7th.

The app provides fans with the same features available at UFC.TV such as different camera angles, score fights round-by-round, chat with other fans, and review pre-fight stats and fighter profiles during live pay-per-view broadcasts. The UFC Fight Library enables fans to watch their favorite on-demand fights from some of the UFC’s greatest superstars including Georges St-Pierre, Jon Jones, and Anderson Silva, and legends Chuck Liddell, Tito Ortiz, and Randy Couture, among many others.

“We are constantly enhancing our technology for fans and this new app takes things to another level, allowing fans to get VIP access and follow the emotion inside the Octagon from just about anywhere around the world,” said UFC President Dana White.

“The UFC.TV App showcases the next generation of digital sports applications,” said NeuLion’s executive vice president, Chris Wagner. “More than just video, the level of interaction and accessibility within the app truly changes the way fans consume sports content and enhances the relationship between the UFC and their fans. This app is a must have for UFC fans worldwide.”

The UFC.TV App is available for free from the App Store on iPhone and iPod touch. Both live pay-per-view events and the UFC Library 6-month subscription are available through In-App Purchase.