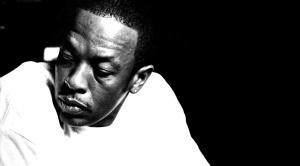 “Kush” is Dr. Dre’s first single off of his much-anticipated follow-up to 1999’s 2001, and features his old friend Snoop as well as Akon. As a track about weed, the jam is suitably slow and thick like molasses (pretty characteristic Dre stuff). It makes for some relaxed listening and will likely attract a wide demographic of listeners. I particularly like the piano on the track as it adds a certain element of building intensity.

As an artist, this is perhaps Dr. Dre’s introduction to the new world of leaked songs over the internet (no doubt he’s experienced it as a producer and record exec), and here’s what he’s had to say about “Kush” being leaked:

It got leaked, and it was a version of it that I wasn’t really happy about. But we’re gonna go ahead and push it and put it out, since everybody seems to like it. It’s about weed smoking, and I didn’t want people to think that’s what my album was about. This is actually the only type of song with that type of content on it.

A lot of people are drawing comparisons of Dre’s forthcoming Detox to Guns N’Roses’ Chinese Democracy and hating Akon’s appearance. First, unlike Axl Rose, Dre never became a parody of himself and always remained relevant (if not as a rapper, as a producer); it’s not like Detox took forever because he was being a prima donna. Next, Akon was needed to perform the higher octave stuff because, at least I believe it to be true, the whole trend of using some female “soul” singer on the backing track is dead.

We like it, but check “Kush” out for yourself, make up your mind, and tell us what you think about it in the comments section below.