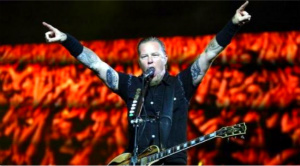 Let’s ignore the garbage (the overblown egos, the Napster controversy, the disrespect to Dave Mustaine, most of the ‘90s and the Gucci-wearing phase, and the documentary Some Kind of Monster) and get to what’s important—the best Metallica songs. For those who don’t know, Metallica is a critical component of what’s collectively known as “the four horsemen” or “the big four” (the other three bands in that elite group of metal soldiers are Megadeth, Slayer and Anthrax) and they helped usher in the era of speed and thrash metal. Like it or not, Metallica songs fueled a generation of aggression, gave refuge to miscreants, inspired countless future bands, and basically tore a new one in the music scene. That’s why they were inducted into the Rock and Roll Hall of Fame after just one year of eligibility and why Guitar Hero saw fit to dedicate a game to the legendary metal band.

For this list of the best Metallica songs, we considered popular choice, consulted an expert DJ at 95.7 The Rock, Brian Simpson (he’s seen 57 Metallica concerts), and polled ourselves internally—believe us when we say that some heated debates ensued. We’ve also excluded most Metallica songs that surfaced between 1996 and 2003; and if you’re expecting to find any pussy chick songs on this list (i.e., “Nothing Else Matters”), go find a closet to go play with yourself in.

Now that it’s time to examine the best Metallica songs, it’s time for you to sit back with a bottle of Jagermeister and enjoy some Metal up Your Ass.

If you’ve ever listened closely to …And Justice for All or if you just a huge Metallica fan you know this; you’ve noticed that there is no bass guitar on the album. This is remarkable because this is the most bass-heavy album in Metallica’s catalog—and it’s simply the heaviest album they ever put out and no song captures that more than “Dyers Eve.” It’s fast (Lars hits approximately 195 beats per minute) and heavy, full of machine-gun guitars, enough double bass to give an Olympic sprinter a heart attack, sequential stops that demand to see horns thrust into the air, flying guitar solos, and vocals sung to metal perfection. The metal gods were on the side of Metallica when they wrote this song.

Anti-establishment, anti-war, anti-military doesn’t get much more direct than it does on “Disposable Heroes.” From the get-go (with heavy machine-gun guitars, crashing cymbals, and tom-toms with cadence), listeners feel as though they’ve received their own marching orders to go and die for someone else’s cause. And who doesn’t like that effect on the cymbal at 30 seconds that makes it sound like an RPG coming right at you? This effect occurs just before phase two of the intro, which features some nice bass riffing. There’s nothing gentle or soft about this song; lyrically it’s hard as shit, dealing with being a puppet in the military and coming to the realization that your life is not your own and you’re trapped; Lars is a madman on the skins and keeps a tempo rarely heard by Metallica; James has always had a nice bark, but at this point in his career he may have been at his best, at a point where his youth still let him climb nicely into the upper registers yet mature enough to get some deep growls (i.e., “Back to the front”); Kirk is in scale heaven at the tracks midpoint; and while the song is structured chaos, Cliff is the glue that keeps it all together.

“Seek & Destroy” might have the most memorable opening guitar riff Metallica ever wrote, and it appears as early on in their career as their debut album—talk about peaking early. To be fair, every band has that great song on their debut album that goes on to become a concert staple, and this is definitely a Metallica anthem that is often used as a call-to-arms chant between James and the fans. It’s a song of revenge, and when it’s played live it’s like metal heads getting revenge on the world for making them outcasts. If you have a friend with even a slight tendency toward metal, play this song for him and the next time you see him he’ll be wearing an old Levi’s jean jacket with patches that declare his allegiance.

No.7 My Friend of Misery

Normally anything off the black Metallica album automatically goes in the guilty pleasure bin and is a candidate for immediate dismissal, but our DJ friend Brian convinced us that the bass solo at the intro was mean as hell. Not only is the bass solo badass, but the whole song, if you listen closely, is pretty damn heavy. It’s not heavy in the loud and fast sense that Metallica and thrash metal are known for, but “My Friend of Misery” is heavy in the Helmet sense, with a big groove. The track also has an ominous and gloomy feeling about it, from its lyrics that convey helplessness and responsibility to Kirk’s harrowing solo at 3:30; it’s perfect for gray days.

No.6 Jump in the Fire

Ah, we finally arrive at a song that Dave Mustaine had a hand in writing. Among the first songs Metallica ever wrote, James changed the original lyrics after Mustaine was kicked to the curb. There are a few amazing attributes to “Jump in the Fire”: first, it’s great to have those epochal lyrics about going to hell, which certainly infuriated religious groups in that record-burning era. Then there’s the youthful quality to James’ squeaky voice; it was so raw and unrefined back then that it’s refreshing to hear. And then there’s that scale melody that runs throughout the song in wonderful juxtaposition to the punk-inspired drumming that Lars is playing. And, especially on the outro, Kirk almost never sounded so fine, but then again Mustaine wrote it and Kirk is a great marionette.

The best Metallica Songs continues after the jump…