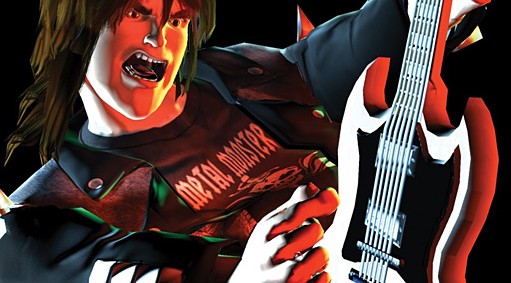 Created and designed by Harmonix Music Systems and published by Red Octane/Activision, Guitar Hero II is the follow up to the smash hit Guitar Hero (considered by many as the best game of 2005). After reading this review, which will be written to include those who haven’t played either of the two versions, be prepared to spend $80.00 (CAN.) to get this game. In fact don’t read this review until you have the cash available because it will drive you crazy not being able to purchase and play the game straight away after reading this review!

You may think that the 80-plus bucks that you fork over to your local retailer is pretty steep but not after you realize you get the game, instruction booklet, and a cool replica Gibson guitar (with a black shoulder strap and stickers as accessories) to use as replacement for the handheld game controller. The guitar has five coloured buttons (instead of strings that are located where the top frets would usually be. Located at the base of the guitar is a strum bar that can be pressed both downward and upward mimicking an actual strum of the strings (if there were any). You will also see a whammy bar, start button, and select button at the base that also come into use at game time.

How to Play (Guitar Hero II)

Once you navigate your way through the different menus and begin playing the game itself it is quite easy to understand. In front of you on the screen of the television is a band ready to play a song and below the stage is a conveyer belt that rotates toward you (if anyone remembers the arcade game Klax you will get the idea). On the belt are different coloured buttons that correspond to the buttons on the neck of the guitar you are holding. As they arrive at the bottom of the belt you are to press the button on the guitar and strike the strum bar simultaneously.

Each successful note played gains points for the player. There is a multiplier the jumps from 2X to 3X to 4X each time ten notes are played in a row successfully. There is also a “star power” meter that rises each time the player succeeds hitting a group of notes that appear baby blue on the belt. When the meter fills a press of the select button engages the “star power” option which doubles the multiplier.

Another meter on the screen records the success of your playing. The more notes you miss the further down the meter runs. If it hits bottom, you lose the song and must begin again.

In Guitar Hero II there are three modes of play: Career, Multiplayer, and Practice.

Career mode is the most extensive of the three modes of play. You get to choose a band name, choose a character and a guitar You are then taken on a bus to a total of eight venues with each stop placing a condition on your successful completion of three or four songs (depending on the difficulty) before moving on to the next. At each venue a new set of songs (five in total) are available to choose from.

When you and the band successfully complete a song, you earn money that can be spent at the Store. The available items include: new songs, new characters, new outfits, new guitars and behind the scenes videos.

If you purchased the first version of this game or have a friend who owns either then you will have access to two guitars and can play the multiplayer mode of the game. There are three ways to join another player in this mode: Cooperative, Face-off, or Pro Face-off.

In this mode of play you and your friend must decide who plays lead and who plays bass or rhythm guitar. Once you start the song you share a score, rock meter, star power meter and streak multiplier. The screen shows two conveyor belts (with the lead on the left) and both players must play consistently enough or the song can end in failure.

Face-off entails what the words mean; you and a friend compete against each other to see who the better shredder is. The screen is split and each player chooses their difficulty level.

In this mode, both players play the full lead guitar track on the same difficulty level. This mode is only available after completing Career Mode on medium level or higher.

You can practice with the different instruments, practice each section of a song, and change the speed of conveyor belt in Practice mode. If you want to see how you would do on the harder levels, or work on parts of a song you have difficulty on in career mode, then this addition to the second game is a godsend.