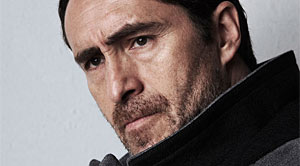 In some shape or form, Demián Bichir (The Hateful Eight) will be playing alongside Michael Fassbender in Ridley Scott’s Alien: Covenant. The second chapter in a prequel trilogy that began with Prometheus and connects directly to Scott’s 1979 seminal work of science fiction.

There’s no official word on which role Bichir will play yet, but according to Variety, the actor has a guaranteed spot in the Alien film, which will also star Katherine Waterston (Steve Jobs), and there’s talk that Danny McBride is in negotiations for a co-starring role. For those unfamiliar with Birchir, he was previously nominated for an Academy Award for Best Actor for his role in 2011’s A Better Life and appeared in many TV series and movies, including The Bridge, Weeds, No News From God, Savages, and Machete Kills, just to name a few.

Bound for a remote planet on the far side of the galaxy, the crew of the colony ship Covenant discovers what they think is an uncharted paradise, but is actually a dark, dangerous world — whose sole inhabitant is the “synthetic” David (Michael Fassbender), survivor of the doomed Prometheus expedition.”