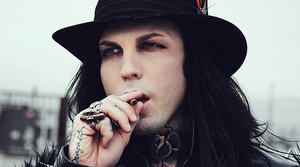 As a song title, “Black Betty” is anything but original. While the Vampires Everywhere track shares nothing else with the 1977 hit from Ram Jam, it does share a whole lot with Marilyn Manson‘s sound. In fact, anyone listening to this track would have to be forgiven if he or she mistook it for an MM song. Nonetheless, it’s still a pretty decent song, and it’s the first piece of new music from the LA-based band since 2012. “Black Betty” will be featured on Vampires Everywhere’s forthcoming full-length album, Ritual, due out in early 2016.

This song is special to me because it represents a part of my life where someone I cared about betrayed my trust. I learned a lot from that situation in particular and thought it to be song worthy. The human desire for fame and recognition spark some of our most primitive actions.

Earlier this year, Vampires Everywhere teased fans with the announcement of a forthcoming album, and an album teaser featuring snippets of new music. Ritual was produced by Matt Good (From First To Last, DRUGS), mixed by David Bendeth (Bring Me The Horizon, Paramore), and will serve as the follow-up to 2012’s Hellbound and Heartless. Check out the album teaser below: