Classhole Delivers Hardcore Punk With A Dash Of NOLA 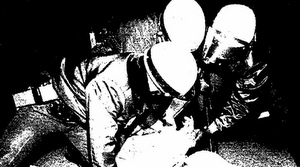 Want to hear some gritty hardcore punk from New Orleans? Want it to be a supergroup? Then check out Classhole. The band features a cast that includes members from Eyehategod, Hawg Jaw, Outlaw Order, The Mystick Krewe Of Clearlight, Mountain Of Wizard, Mangina, Tirefire, haarp and more. And they’re debuting three brutal, mosh-inspired tracks over at www.earsplitcompound.com.

Classhole will release their self-titled full-length on January 1, 2016. Make your pre-order here.

Leaving poetics to the wayside, Classhole spews forth a corrosive blast of combative angst with every enraged second of the production. The band’s venomous sound is the product of its surroundings in more ways than one. The riotous ways of the members’ collective output combined with the bustling, diverse New Orleans metal underworld being fueled by societal corruption makes for 15 mutinous tracks of filthy hardcore punk revolt.

Already released in a limited vinyl run as the maiden release for the band’s own Terror Cult Records, Classhole will now see a full-on CD release through The Compound Recs., with a four-panel digipak version featuring an alternate layout and a lyric liner, plus bonus video footage of the band performing five vicious tunes from the record live in NOLA.