Shamrock vs. Gracie III Slated For Bellator 149 In February 2016 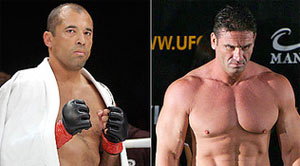 Two MMA legends will meet inside the cage for a trilogy, but this time it will officially take place in Bellator rather than in the UFC. Ken Shamrock vs. Royce Gracie III has been booked for February 19, 2016 at Bellator 149 in Houston, Texas. The announcement was made on Friday at Bellator 145, and MMA Fighting’s Ariel Helwani later confirmed the bout will be at openweight.

Regarding Shamrock vs. Gracie 3, it will take place at open weight. Texas commission has already approved it.

Shamrock made his first MMA return in June against Kimbo Slice after a 5 year break from the sport. He lost by first-round knockout. As for Gracie, he hasn’t competed professionally since 2007. Both fighters met for the first time at UFC 1 in 1993 and a second time at UFC 5 in 1995 where the fight was declared a draw.

Slice and Dhafir “Dada 5000” Harris have also been booked and is set as the co-main event of Bellator 149, which takes place at the Toyota Center.