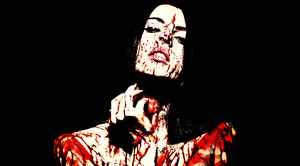 For your first film, you ended up with a pretty “rockin’” cast, including yourself; can you tell us about the cast and how some of the bigger names ended up getting involved?
I was very lucky to have such an amazing, talented cast and crew to work with! The film stars Billy Morrison, who plays guitar for Billy Idol and Royal Machines and is a talented actor who has appeared in all kinds of things including an episode of one of my favourite shows Californication. How that happened was that I was at the wedding of my wonderful friend, Laney Chantal, who is also a SuicideGirl and SFX make-up artist, to her hubby Jeordie White (who makes an appearance in my film and co-scored it with Rob Patterson!). My friend Moxi Suicide introduced Billy and I who was also in attendance at the wedding and told him about my film and I realized he would be perfect as “The Paramedic” and it all worked out from there!

London May, my other wonderful co-star, who plays drums/bass in Glenn Danzig’s band, Samhain, and also does a ton of other musical/ acting projects was someone I’d known for a little while who actually reached out to me about whether there was a part in my film for him when he heard I was making it! It just made so much sense for him to play the “Detective” and he did such a great job along with Billy of making our two lead characters come to life!

As the short’s writer, what inspired the movie for you? Did it come from a dream, something you saw or heard, or was it just an idea that jumped in your head?
It completely came to me in a dream. Massacre was all subconscious. It’s the culmination of the things that lurk deep in the recesses of my brain! I awoke from a nap one day after having a very vivid, violent, and bloody dream, grabbed my notebook and sat down for I don’t know how long and wrote the whole first draft for Massacre as if in a trance! A lot of good ideas come from dreams, or nightmares haha, at least for me!

How old were you when you started writing? Have you always written horror?
I was very young when I started writing. In fact, I feel almost as if I was born writing because I can’t ever remember a moment of being conscious that I didn’t write or somehow otherwise create. There’s definitely a lot of horror in me and I have written a lot of it in my time, but it hasn’t always been horror and today it still isn’t always horror, but everything I write usually has a little touch of darkness in some form or other to it. In fact, I’m about to release my debut novel later this month Seraphim Song. It’s sort of an urban fantasy novel; the lead character is a an angel who fell to earth who also happens to be a rockstar. It’s not really horror but it still has some darkness to it and some good horror themes, I mean Satan himself makes an appearance! It’s actually something I wrote when I was very young, I think a teenager even. I found it on one of my old hard drives recently, a whole completed manuscript that I completely forgot existed and I have since edited it up a little to bring it into the 21st century and now I’m releasing it as an eBook later this month! The cover is being designed by a really talented British artist named Sam Sharon who has done a lot of horror art and art for bands like Rob Zombie, which I’m quite excited about!

What triggered your passion for horror? Can you name a few of your inspirations: writers, directors, films?
Everything! I remember watching the Rocky Horror Picture Show as a young child, reading Goosebumps novels, watching Jaws and a lot of Peter Jackson’s early splatter movies. I also read a lot of Poppy Z Brite vampire novels when I was younger, which I think had a little to do with my love of vampire movies! I read a lot of Stephen King too. I was also raised on Black Sabbath, Led Zeppelin, David Bowie, Deep Purple, and Bauhaus, which I think might have contributed to my love of metal! David Lynch and David Cronenberg are two directors that helped trigger my passion for dark, strange films, plus more as I was in high school/university – where I studied media and film – films like Saw, Hostel, Texas Chainsaw Massacre, Friday the 13th – had a big impact on my love for slasher flicks. I also like lots of B-horror movies, Italian Giallo, experimental films, foreign films – especially French film and more.

What aspects of being a SuicideGirl helped you succeed in the Massacre project (in terms of confidence, motivation, networking, etc.)?
I’ve been a SuicideGirl for a decade now, so it’s kind of hard to separate out what aspects helped with what as it’s part of my identity at this point. I don’t know what the difference would be without it. And also with things like confidence and motivation, I think those are traits necessary to even consider becoming a SuicideGirl in the first place not necessarily byproducts of it though, but it of course helps with networking, which is great, and is a wonderful, supportive community to be a part of!

Obviously, your work with Massacre is far from finished, but have you started working on your next project yet?
Yes, indeed! I’ve been working on the release of my upcoming novel, Seraphim Song, lately as well as writing a feature film based on Massacre, and a short film I’ve written called Blood Bath, which I’m almost ready to start going into pre-production on and also a TV show I’m developing entitled Teeth, plus acting in other peoples’ projects and all kinds of things. It’s pretty busy right now!

For a fun final question, what five items would you want with you in a zombie apocalypse?
Semi-automatic weapon (with lots of ammo!), machete, napalm, vegan protein bars, and Shaun of the Dead!

Thanks so much for taking the time to answer our questions!
Thank you!!!!!