“Rampage” Jackson Is Back On Track For UFC 186 In Montreal 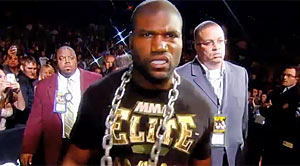 Guess who’s fighting at the Bell Centre in Montreal this Saturday night? You guessed right if you said “Rampage” Jackson, who’s back on the UFC 186 fight card and he will face Fabio Maldonado inside the Octagon. How did this happen? Well, on Tuesday, a judge in the Superior Court of New Jersey’s Appellate Division overturned Bellator’s injunction against “Rampage,” allowing him to compete in the UFC once again.

The fight between “Rampage” and Maldonado remains as the co-main event for UFC 186, but according to the UFC it will take place at a catchweight of 215 pounds.

The thing that Rampage always brings is intensity. He comes in and tries to finish you and I love that about him, He’s taking on Maldonado, another guy who loves to stand, loves to trade toe to toe, and those are always fun fights.

The main event at UFC 186 is a UFC flyweight championship bout between current Champion Demetrious Johnson and top contender Kyoji Horiguchi, which was originally scheduled as the co-main event.