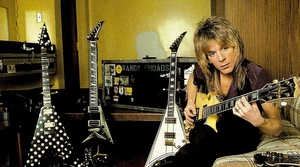 We’ve already brought you the lackluster version of “Crazy Train” from the Immortal Randy Rhoads – The Ultimate Tribute album. If you haven’t heard it yet, you might not want to, but if you like train wrecks, by all means, follow this link.

Undoubtedly, creating a Randy Rhoads tribute album and packing it full of heavy metal heavy weights is a great idea, so you better make sure that what you put on it is tops. Unfortunately, Serj Tankian and Tom Morello all but murdered “Crazy Train.” So, we’re happy to say that the tribute version of the classic “Mr. Crowley,” featuring Chuck Billy (Testament) on vocals and Alexi Laiho (Children of Bodom) on guitar, is a far cry better than the previous release. Granted that Chuck Billy’s vocal style is vastly different than Ozzy Osbourne’s, and that may hurt the reception of this “Mr. Crowley.” Although it’s a tribute to Rhoads, Ozzy’s legendary vocals are immutable and echo throughout these tracks. However, Laiho did an amazing job on guitar; he managed to stay true to the original with subtle additions of his own style, unlike Morello who polluted “Crazy Train” with too much garbage.

But, if you still want the original, here:

Immortal Randy Rhoads – The Ultimate Tribute will be released on March 3, 2015, via UDR Music.