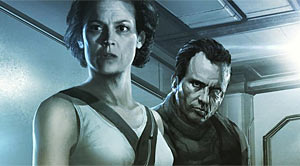 In the near future, there’s a good chance we may never see another Alien sequel go into production since FOX appears to be favoring Ridley Scott’s current detour of the Xenomorph franchise with Prometheus. But let’s hypothetically assume FOX would move forward with an Alien sequel tomorrow — how would the story continue and what would it look like?

If you have no idea because you’d rather have someone else with a lot more creativity take on that challenge, then you may want to feast your eyes on Neill Blomkamp’s unofficial concept art for a secret Alien movie that features Ripley (Sigourney Weaver) reuniting with U.S. Colonial Marine team member, Dwayne Hicks (Michael Biehn). Based on his vision in the gallery above, I get the feeling Blomkamp would completely skip David Fincher’s threequel and the horrible Alien: Resurrection, and focus more on a story that picks up years after the events in Aliens.

So far, his vision is beautifully hand drawn on paper, but I’d love to see a draft of the story before falling in love with this. Keep in mind, this is an Alien project that will most likely never go into production.