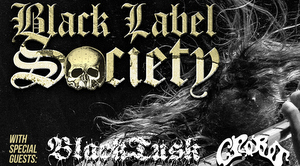 After a trying year and the loss of their brother and bandmate Jonathan Athon, Black Tusk will be honoring Athon’s wishes and going on tour in Europe with Black Label Society. Black Tusk issued the following statement:

It’s been an incredibly trying time for us over the past month and we want to thank everyone for their support. We had confirmed the tour with Black Label Society and finished the new album before Athon’s accident and Athon, specifically, had been very excited about the opportunity to tour with BLS and we feel there’s no way he’d want things to end on this note. Corey Barhorst, formerly of Kylesa and currently of Niche, will be stepping in for Athon for the time being. All of us go back over 10 years and Corey seemed the natural choice to carry on for Athon.

The band has set up a Memorial Fund for Athon, his girlfriend and his family. Donations can be made at AthonFund@gmail.com.

The band recently completed their fifth full-length record with producer Joel Grind of Toxic Holocaust at Audiosiege Studios in Portland, Oregon, this past September.