Kurt Cobain Documentary, Montage Of Heck, Coming To HBO In 2015 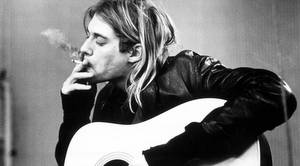 There have been a few Kurt Cobain/Nirvana films in the past, but the one currently being prepped for HBO might end up being the most revealing. That’s because Montage of Heck’s director, writer, and producer, Brett Morgen (Crossfire Hurricane), had full access to Cobain’s personal and familial archives. As a result, the film is expected to include live Nirvana footage, previously unheard tracks, home movies, journals, demos, songbooks, artwork, photography, and more (that’s according to Loudwire.com).

Once I stepped into Kurt’s archive, I discovered over 200 hours of unreleased music and audio, a vast array of art projects, countless hours of never-before-seen home movies, and over 4,000 pages of writings that together help paint an intimate portrait of an artist who rarely revealed himself to the media.

Morgen also revealed that the documentary’s title was taken from a musical collage of the same name that Cobain created circa 1988. The recording included original material, Nirvana demos, songs recorded off the radio, and copies of songs from Cobain’s personal record collection, which includes Van Halen’s “Eruption,” Sammy Davis Jr.’s “The Candy Man,” and the Butthole Surfers’ “Eye of the Chicken.” No doubt there were plenty of other goodies on there, so let’s hope they made their way into the film.

We’ll keep you posted as details about Montage of Heck are revealed.