New Music: Rise Of The Northstar Drops “Dressed All In Black” 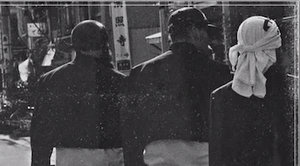 Manga metal moshers Rise of the Northstar have released their brand new digital single, “Dressed All In Black.” Order the crushing song now on MP3. If you’d like to hear the song first, just hit play in the player above.

“Dressed all in Black” comes off the band’s highly anticipated debut album, Welcame, which will be released November 21st, via Nuclear Blast Records. Welcame was mixed and mastered by renowned producer Zeuss (Madball, Hatebreed, Emmure).

The album will be available as a limited-edition digipak including a so-called obi, a traditional Japanese paper strip, wrapped around the CD. Two special bundles including a different rare and limited T-Shirts can be pre-ordered as well. Welcame will also be available on black vinyl and on a Japanese style white vinyl with a red label (Nuclear Blast Mailorder only.) Go here to secure your item of choice! While waiting for the whole cluster bomb of an album to be released, a few selected legends of the hardcore and metal world have already gotten a sneak peak and are overwhelmed:

“ROTNS really know how to bring that old thrash sound current! Their NYHC influenced style mixed in with their original mojo is something that appeals to many extreme music enthusiast world wide! Killer band!”
Roger Miret | AGNOSTIC FRONT

“What a sick mixture of some of the greatest influences from the 90’s, I love what they are doing!”
Billy Graziadei | BIOHAZARD

“Hardcore will never die as long as bands like ROTNS are carrying the torch. A crushing album!”
Mille Petrozza | KREATOR

„This is some HEAVY stuff with a youthful, hip hop kind a flare/flavor, what can I say… they definitely demonstrate their saiya style!“
Freddy Cricien | MADBALL

Related Items: HardcoreNYHCRise of the Northstar