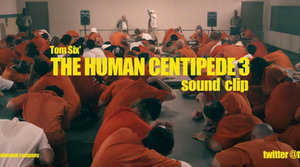 After Tom Six shocked the world with his two previous installments of The Human Centipede, the time has come for a third to up the ante. Details about The Human Centipede 3 have been oozing out like an infected, puss-filled sore for a while now, but today we have the first sound clip from the upcoming film. It sounds pretty intense, as it should since rumor has it that there is a 100+ centipede.