Top 10 Most Uncomfortable Movies! Or: I May Need To Wash My Eyes Out With Turpentine 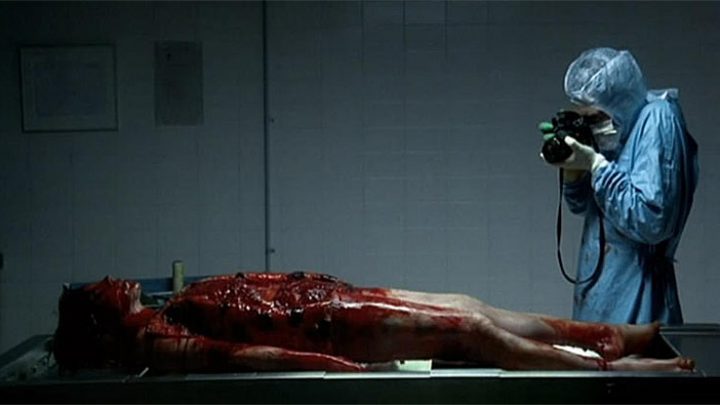 The month of October is upon us and with Halloween a few weeks away, now is the perfect time to roll out some articles that are about the things that scare us, make us recoil in horror, and generally make us wish that our short-term memories came equipped with a delete button.

To kick things off, your traumatized-beyond-all-recognition reviewer is proud to present Yell! Magazine’s Top 10 Most Uncomfortable Movies to sit through while still retaining a semblance of sanity. I was at a disadvantage when writing this list since I left my sanity at the bus stop a while back with twenty bucks and a ticket to oblivion. What? The damn thing was heavy! And it kept me from really enjoying some of the movies on this list.

These disturbing jewels each contain moments that viewers may wish to unsee. Once experienced, these movies tend to rent space in one’s subconscious for the unforeseeable future. Years down the line, you’ll still be talking about them while you wait in line for the green Jell-O at the insane asylum. (Do NOT touch the yellow Jell-O. The orderlies pee in it. I learned that one the hard way.) If you find yourself voiding your bowels and/or stomach contents halfway through this list, I recommend a healthy regimen of J-Pop songs, a Care-Bears movie marathon, and a Snuggie to cuddle in with your significant other (or your cat(s), as the case may be).

Don’t come complaining to me if you start having visions of things that aren’t really there, are suddenly overcome by the desire to murder helpless animals, or get an erection at any point during this article. OK, fine, I take full responsibility for the erection, but everything else is your sideshow, ya freaks!

One thing the 10 movies on this list have in common is that they feature very human monsters doing very inhuman things. There’s a distinct lack of aliens, demons, and other assorted creepy-crawlies on this list. Case in point: Chan-wook Park’s polarizing Oldboy. The movie begins with our protagonist imprisoned in a one-room, bricked-in apartment for no apparent reason, only to be released seemingly at a whim 15 agonizing years later with a dead heart beating with nothing but hate… and a craving for some live squid, apparently.

I would have gone straight for Pizza Hut, but to each his own.

Our hero Dae-su Oh, played with finely aimed craziness by I Saw The Devil’s Min-sik Choi, soon hooks up with a comely waitress who falls both for him and his plight. They have wild, sweaty sex. Keep that in mind, it becomes important later on. Through some investigation and the generous use of a ball-peen hammer, Dae-su soon discovers that his imprisonment was the result of him pissing off a school-chum many years gone by. Said chum, now crazy rich on top of being plain ol’ crazy, decided to avenge himself on Dae su by turning him into a revenge-fueled monster for 15 years, setting him free, carefully guiding his steps toward the aforementioned waitress and watching them sleep after gassing them into unconsciousness post coitus. Oh, did I forget to mention that the waitress in question happens to be Dae-su’s DAUGHTER?

I literally have nothing funny to say.

In typical Hollywood fashion, Oldboy is scheduled for a big-budget remake with Will Smith, who will star as man sent to prison for 15 years for a crime he didn’t commit. Way to completely miss the point, Hollywood!

No.9 Men Behind the Sun

The thin line separating man from beast becomes unusually blurred during times of war. Atrocities against your fellow man come easily during war, it seems as if even the most despicable acts become readily permissible when ordered by a superior officer. While Western preconceptions of the Japanese brings forth images of samurais, kimonos, drinking tea in flower gardens, and utter politeness one needs look no further than World War II for a shocking reality check. Specifically, Unit 731, the biological experimentation arm of the Imperial Japanese Army.

So, who shall we fuck up today?

Men Behind the Sun is the more-or-less true story of the inhumane experiments that the Japanese scientists, term used as loosely as possible, inflicted on innocent Chinese captives from 1937 to 1945. If you’ve ever wondered why the Chinese still hold a massive grudge against the Japanese for their WWII activities, this is one of the main reasons, along with the Nanking Massacre, also known as The Rape of Nanking, for exactly the reason you’re picturing. But enough of the history lesson. Men Behind the Sun is a brutally effective madhouse of gory special effects. One prisoner is left crucified out in the brutal sun for days on end. Eventually, his flesh starts to peel off quite graphically. Another helpless prisoner is subjected to extremes of cold, and then heat, before having the flesh of both his arms ripped off right to the bone.

Wow, that guy is so boned! (crickets)

Men Behind the Sun is an endurance test for the casual horror fan. Even a longtime adept like myself found himself cringing from time to time. It’s a grim testament to man’s inhumanity.

Contrary to popular belief, movies designed to provoke a reaction by subjecting its audience to hideous imagery isn’t a recent convention. In fact, Un chien andalou (An Andalusian Dog) beat every other entry on this list to the punch by several decades.

This 1929 silent, surrealist short film, directed by the legendary Luis Bunuel, of Belle de jour fame, caused quite a stir when it opened. Shot with the express purpose of not making any sense at all, andalou lacks chronological direction… or any kind of direction at all, really. You ever see one of those movies in which the protagonist is subjected to a series of disjointed images, probably while having his eyes pried open, forced to watch disturbing picture after picture (A Clockwork Orange) until his sanity is reduced to fine mush? Watching Un chien andalou is exactly like that.

And speaking of orbital sockets, andalou’s main claim to fame is a sequence where a blank-eyed actress, in close-up, has her eyeball cut open, ever so slowly, by a man wielding a razor blade. For a movie shot in 1929, the special effects hold up remarkably well, complete with white, milky stuff pouring out of the wound. If such a moment can have an impact on even this jaded horror movie fan, imagine how 1929 audiences must have reacted.

It takes a special kind of movie to get its director arrested for murder. Which is exactly what happened to infamous schlockmeister Ruggero Deodato, who made an appearance on the Top 10 Barbarian Movies list a while back for his directorial duties on The Barbarians.

Cannibal Holocaust is a movie that thrives on word of mouth. Its legendary status was established years before the advent of the Internet, but message boards breathed new life into its cult status. It was whispered about in newsgroups and discussed on IMDB. When I first started touring Internet movie websites, Cannibal Holocaust was a name that kept coming up over and over again as a way for this virginal horror fan to pop his cherry and take his first step into a darker, bloodier world. Keep in mind that this was over 10 years ago and locating rare movies wasn’t as easy as paying a visit to The Pirate Bay and downloading a torrent. So, all I had were bits and pieces, rumors of rampant and real animal killings, stories of Deodato’s arrest on the grounds that he actually murdered his actors, impalements and gratuitous rape scenes. Occasionally, the odd, grainy screenshot would surface.

Clearly, this is a tragic pole-vaulting accident.

The actual movie doesn’t disappoint. While it is amateurish to the extreme, this overall grungy feel only adds to this movie’s appeal. Shot gonzo documentary-style, Cannibal Holocaust follows a film crew that meets a grisly end on the dinner table of a primitive tribe with a taste for silly white people (the other, other white meat). In between we get multiple real animal killings, which are much more revolting than any of the fakery going on in the movie’s other gory scenes. FYI: Deodato was eventually cleared of all charges regarding the murder of the actress in the screenshot above. Turns out, she’s actually sitting on a bicycle seat and holding the top half of the stake between her teeth. Even knowing that, that picture still gives me the creeps.

Necrophilia is a taboo rarely discussed in movies. Even rarer is a movie that goes the distance in showing hardcore living on deceased action. The 1996 movie Kissed, starring Deadwood’s Molly Parker, took the dramatic approach and shot its corpse humping sequences in an almost dreamlike manner.

I’m surprisingly alright with her riding my deceased penis. Aw crap, I said that out loud, didn’t I?

Aftermath, a short film by Nacho Cerda, who totally sounds like a Mexican wrestler and as long been suspected of having directed the infamous Roswell alien autopsy video, dispenses with any of the psychological turmoil associated with having a dead guy fetish and goes straight for the gut. Or guts, in this instance. And liver. And spleen. And…

This is what I get for mentioning deceased penises…

Aftermath is a bullet aimed straight at the viewer’s head, unerring in its aim and dedication to completely ruining your day. A mortician autopsies a recently deceased female car crash victim in gruesome and lingering detail. He then takes pictures of himself mounting and raping the corpse, again quite graphically. The cherry on this vomit sundae? He keeps a souvenir: the victim’s heart, which he brings home and feeds to his dog. That’s it. There’s no moral to the story, no comeuppance for the bad guy, and no justice for the dead woman’s violation. If you want an endurance test to show your amateur horror buddies, this is the movie for you.