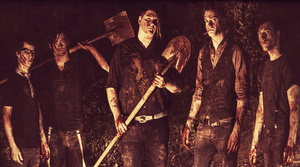 The headline says that The Funeral Portrait proves KISS‘ Gene Simmons wrong, that they make his assertion that “rock is dead” irrelevant. Sorry to burst writer Kaj Roth’s bubble, but it’ll take a lot more than The Funeral Portrait to revive rock, if, in fact, rock is dead, which it isn’t.  Although the rock industry, because that’s what Simmons was getting at, is in a transition phase, the music itself and the spirit of it is alive and well. What Roth has led with is a vapid statement with no legs to stand on designed to grab people’s attention. Perhaps Roth should get out and see a show more often.

Nonetheless, there are some interesting arrangements on The Funeral Portrait’s debut EP, For the Dearly Departed , but it’s nothing Earth-shattering or original. In fact, much of this “theater rock” band’s material echoes a lot of what My Chemical Romance did 10 years ago. And where are they? Are they out there proving Gene Simmons wrong?

If you’re interested in hearing For the Dearly Departed now, you can stream the EP in the player above. Other than that, the EP comes out on September 23rd.