Sacrificial Youth, A Punk Musical – “Selling Out Comes With A Price” 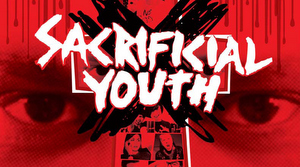 Sacrificial Youth is a hardcore punk musical, telling the story of TJ (Rob Baker), a teenager caught at the crossroads. When a multi-national corporation hatches an evil plot of biblical proportions to destroy The Scene, TJ is forced to accept his fate as the chosen one – to stand up and fight back.

This is the second feature film from Regressive Films, the folks who created the acclaimed documentary You Weren’t There-A History Of Chicago Punk 1977-1984. The film has already drawn praise from the likes of Artforum, and the Chicago Reader’s Drew Hunt also weighted in, saying, “Not unlike the subculture being portrayed, this punk musical makes up for its low-production values with brazen stylistics, shifting heedlessly between genres—from scene to scene, anything from rock-opera fantasy to psychological horror. The vibrant colors and incongruous imagery would make Busby Berkeley blush.”

Plans are underway for an IndieGoGo crowdsource campaign as the DVD goes into production. The DVD and VOD release will be rolling out in conjunction with a Chicago screening to be announced shortly before Losurdo and Tillman hit the road for screenings around the U.S. and Europe. The film played the CBGB Fest in NY, Fest de Nouveau in Montreal, and CIMMFest in Chicago; it will also be screened at the Mar Del Plata Film Festival in Argentina on November 18th & 21st.

The movie was written and directed by Joe Losurdo – he composed the original soundtrack which is performed by members of Tutu & The Pirates, Strike Under, Mentally Ill, Life Sentence, Rights Of The Accused, Regress, Negative Element, Cursive, Nora O’Connor, Bobby Conn, Cattivo, Regal Standard, the Goblins, She’s Still Dead, and more. In additon to Baker in the lead role, Mike O’Connell turned in a hilarious portrayal of Max Thorne, the evil band manager. In support are Sam Porter as Rob’s bandmate Jud and Kate Lane as Maggie. Venus Zarris turns in a genius performance as Maggie’s super religious chain smoking mother.

Losurdo produced the film with Christina Tillman. They are currently at work on a new documentary about the legendary record label and store Wax Trax! Records.