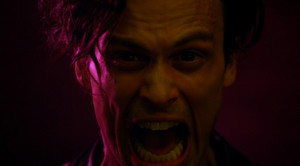 Given your interest for directing, who are your five favorite genre directors?
Oh, man, Alfred Hitchcock for sure, Roman Polanski, John Carpenter, George Romero, and Wes Craven, ah, Cronenberg, I love ’em all!

If you were to direct a feature-length horror, would you make a straight-forward slasher, a thriller, a comedy horror…?
I would hope that it would be a genre we’ve never had before. My hope would be that it wouldn’t really fall into a category, but it would be in the horror world. My dream is to make the world’s scariest PG movie. Because I feel that if you can do that, then you’ve done something special; you haven’t relied solely on gore or things like that, and you’ve been a little more cerebral but you’ve also been able to reach every type of audience.

Do you have any plans right now? Is anything written?
Yeah, I’ve got a lot of fun things happening. I just wrote another screenplay that I’m hoping to direct. I’m directing two episodes of Criminal Minds this year. I’m sort of producing and acting in a modern-day adaptation of Tom Sawyer and Huckleberry Finn; I’m playing Joe Harper, Tom’s best friend. It’s a really unique script and I’m excited about that.

Suburban Gothic, based on the trailer, seems to have some similarities to Odd Thomas. Is this something that you were aware of during filming?
No, I wasn’t aware of it. I think it’s safe to say that once you see Suburban Gothic that you’ll agree there’s nothing in the world like it. You saw Excision so you probably understand Ricky Bates, but he’s making movies that nobody else would try to make and nobody could make and it’s just an incredibly fun, midnight movie, slumber party, Rock and Roll High School meets Scooby-Doo. I’m really excited about it. I think it’ll play wonderfully here.

Suburban Gothic makes its World Premiere tonight, have you seen it yet, and can you tell us a bit about it?
I have. It’s a little bit like if a Disney Halloween special had an R rating, a hard R rating. It feels like an early John Waters film a little bit, John Waters is in it actually. It’s just a fun adventure that’s best watched at a slumber party. It’s a movie made by weirdos for weirdos.

This wasn’t your first dance with director Richard Bates; how did he approach you for this role? And how was it to be directed by him again?
We met kind of just before Excision and I said, “anything I can do to help out.” I love independent film, I love that he just struck me as a very unique person and I said if you need anyone in your movie, let me know and he asked me to play a tiny cameo [in Excision] and he let me improvise this sex-ed teacher and it was some of the most fun I’ve ever had. He just let me riff for 40 minutes and it was great. After that he said, “I want you to star in my next movie,” and he spent that year coming up with this concept and we just got closer and closer and now we’re best friends.

What’s the worst part about being directed by him?
(laughs) The worst part about being directed by Ricky? There’s no worst part. He and I are very similar. You know, this one was a tough one, the day before we started filming this movie the girl that I thought I would one day marry broke up with me so I was like morbidly depressed and Ricky said to me, “There’s no better way to start a Ricky Bates comedy than by being morbidly depressed.”

I have a feeling that you’re a lovable character in Suburban Gothic, which I think is a contrast to your “Are you fucking your scarf?” role in Life After Beth. Which type of character do you prefer, lovable or jerky?
It’s so funny, playing Kyle Orfman was a lot of fun. I love character roles. I don’t know, I love them both equally. In Suburban Gothic, when you’re playing the lead in a movie you, by nature of it, need to be more of an anchor and in a weird way more the straight man, whereas in Life After Beth, being the crazy brother you get to bring all the zaniness, so I love them both. And I got to shoot them back to back, so it satisfied two wonderful dreams.

Life After Beth slightly alters the zombie mythos, making the transformation more gradual. Since zombie zealots are passionately opinionated, what are your thoughts on that shift?
I think Jeff has taken the genre and turned it on its head in a very special way. I love the evolution of anything so I think adding the smooth jazz, and the way his zombies go is they come back and they’re sort of normal, forgetful people, and then as a few days go by and they begin to rot they sort of turn into the more traditional “rrr rrr rrr” zombie until they really do become more of the Romero style. I love it. He’s made them more neurotic, which Larry David can appreciate.

In a traditional zombie apocalypse, what five items would you want to have to ensure your survival?
That’s a great question. You want a weapon that won’t run out of ammo, so you gotta bring a machete, you gotta bring a lot of water, you gotta bring some smooth jazz, probably Kenny G., and a megahorn, you don’t want anything electric, you’d have to have a hand-cranked record of Kenny G., and the last two things would be Jeff Baena and Ricky Bates.

In real life, what’s the worst injury you’ve sustained on set?
When I was in (500) Days of Summer we were filming a press piece for it and destroyed my knee. I had to have three knee surgeries. I was told I might never walk without a cane. I was on crutches for six months, a cane for three months, and probably a year of odd walking. I almost died on Suburban Gothic a couple of times. Ricky Bates is fast and loose with a hammer and at one point he had me standing in front of a mirror, they had the grip department smashing the other side with a hammer, one foot from my face. I lived through that, and then they put me in this tiny office with a jet engine fan to create this effect of my face being ripped apart almost with papers and props flying at my head. I survived both narrowly.